Homozygous vs Heterozygous: Definition and Differences

Homozygous refers to the state of the genes or genetic condition in which an individual has inherited the similar DNA sequence for a particular gene from both their biological parents and it is generally used with reference to the disease.

For instance, if an individual inherited a mutated allele in the DNA sequence from maternal side and similar gene from the paternal part as well, then the mutation is explained as homozygous for that individual.

Thus, after receiving 2 identical copies of the gene, detrimental effects will express phenotypically for which the genes are coded.

The term “heterozygous” attribute to a pair of alleles so heterozygous is when you have 2 dissimilar alleles that means you have received dissimilar copies from each parent.

In a heterozygous genotype, the allele which is dominant dominates over recessive and hence the dominant feature will be expressed while the recessive will not show but you will be still a carrier.

This will be passed it on to your children. Homozygous is the opposite of the heterozygous where the feature of the similar alleles — either dominant or recessive — is manifested.

There are three possible alleles for A, B, O blood type. However, the contribution from each parent’s gene makes a difference an individual exhibit with phenotypic characteristic.

Sometimes, it may be possible that both the parents pass on the same allele for a gene, making it a homozygous trait.

While in certain conditions, different set of alleles are triggered resulting in heterozygous trait.

A homozygous trait is mainly responsible for phenotypic appearance in the organism. A pea plant will definitely exhibit long stem, if it receives two alleles associated with tallness. In contrast, if it gets two “short” alleles, then plant with stunted growth will be evident.

Thus, for a specific characteristic, the genotype may be either homozygous or heterozygous, however, the way it is expressed it is identified as phenotype. 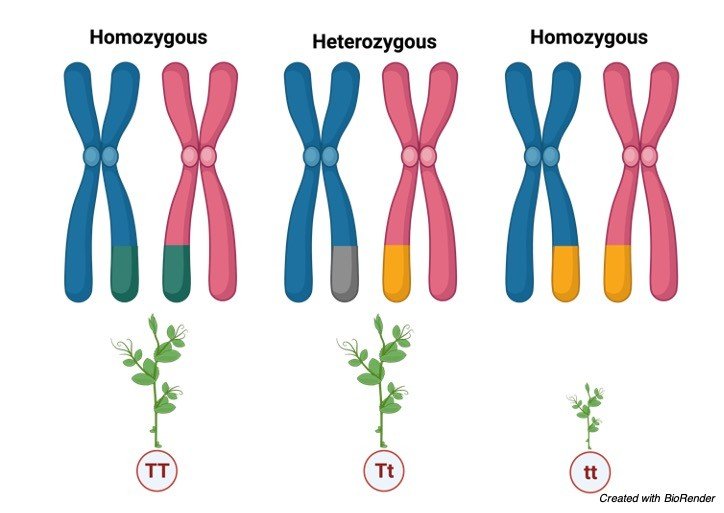 Heterozygous is a genetic condition where an individual inherits different alleles of a gene from the two parents.

Heterozygosity is observed in a diploid organism where a gene contains two different alleles at a gene locus.

In heterozygous chromosomes with genes having traits that are expressed via complete dominance, only the trait coded by the dominant allele is expressed.

In complex dominance schemes, however, the expression of genes is more complicated. In incomplete dominance, the phenotypic trait observed is somewhere between dominant and recessive phenotypes.

Similarly, in co-dominance, the phenotypes are expressed by individual alleles in different parts of the body.

The heterozygous genotype has relatively higher fitness than the homozygous-dominant or homozygous-recessive genotypes. This fitness is termed as ‘hybrid vigour’.

Organisms reproducing by sexual breeding mechanisms are usually heterozygous for the traits that are varied.

Methods of sexual reproduction result in heterozygous chromosome formation. This ensures that the phenotypic characteristic in the offsprings is different from that in the parents.

Mostly, heterozygosity is defined at the specific locus where copies of the gene affecting a trait present on the two reciprocal homologous chromosomes are different.

If the mutated allele is dominant, only the mutated copy is capable of causing the disease. This condition is called dominant-disease.

If the mutated allele is recessive, then the disease will not appear, and the organism will act as a carrier.

Examples of Homozygous vs Heterozygous

Instances of heterozygous genotypes: Sickle-cell anaemia: The attribute for sickle-cell disorder is a passive characteristic that makes the platelets be shaped inaccurately.

Accordingly, in people with heterozygous genotype, the prevailing characteristic is communicated, forestalling the sickle-cell pale condition.

In sickle-cell paleness, the red platelets change its design into sickle-morphologic characteristics, which makes it little and lacking to convey sufficient oxygen.

Along these lines, the heterozygous genotype of the quality liable for sickle-cell iron deficiency gives a benefit to such people.

This quality codes for the protein that makes the hair be wavy. Heterozygous genotype makes the hair in such people be wavy, which is among wavy and straight hair.

This marvel is additionally called fragmented predominance, where the aggregate communicated is between the prevailing and passive ones.

In complete strength, the wavy hair straight is seen in people with the heterozygous condition.