o Protein Translation is the process of protein synthesis directed by mRNA.

o mRNA is the template which carries the genetic code from the nucleus to the cytosol in the form of codons.

o The mRNA message is always written in the 5’ → 3’ direction, and the polypeptide chain is synthesized starting with its N-terminal residue.

o The mRNA is always read in groups of 3 nucleotides.

o tRNA contains a set of nucleotides that is complimentary to the codon called the anticodon.

o tRNA sequesters the amino acid that corresponds to its anticodon.

o The 5’ base of the anticodon is capable of a “wobble” in its position during translation, allowing it to make alternative hydrogen bonding arrangements with several different codon bases.

o Identity elements (not on the anticodon) as well as the anticodon determine which amino acid is bound to the tRNA by the aminoacyl-tRNA synthetases.

o rRNA with protein makes up the ribosome, which provides the site for translation to take place.

o The ribosome is composed of a small subunit and a large subunit made from rRNA and many separate proteins.

o The ribosome and its subunits are measured in terms of sedimentation coefficients given in Svedberg units (S).

o The sedimentation coefficient gives the speed of a particle in a centrifuge, and is proportional to mass, and related to shape and density. 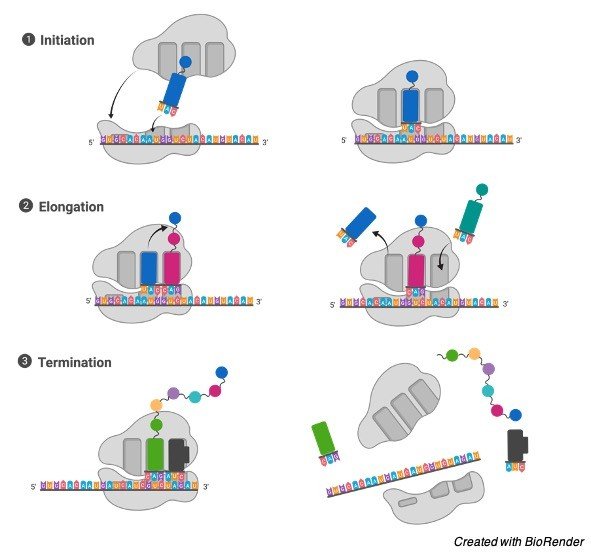 o Prokaryotic ribosomes are made from a 30S and a 50S subunit and have a combined sedimentary coefficient of 70S.

o Eukaryotic ribosomes are made from a 40S and a 60S subunit and have a combined sedimentary coefficient of 80S.

o The complex structure of ribosomes requires a special organelle called the nucleolus in which to manufacture them.

o Although the ribosome is assembled in the nucleolus, the small and large subunits are exported separately to the cytoplasm.

o rRNA is synthesized in the nucleolus.

o After posttranscriptional processing in a eukaryote, mRNA leaves the nucleus through the nuclear pores and enters the cytosol.

o With the help of initiation factors, the 5’ end attaches to the small subunit of a ribosome.

o A tRNA possessing the 5’-CAU-3’ anticodon sequesters the amino acid methionine and settles in the P site (peptidyl site).

o This is the signal for the large subunit to join and form the initiation complex.

o This process is called initiation. Now elongation of the polypeptide begins.

o A tRNA with its corresponding amino acid attaches to the A site (aminoacyl site) at the expense of two GTPs.

o The C-terminal of the methionine attaches to the N-terminal of the incoming amino acid at the A site in a dehydration reaction catalyzed by peptidyl transferase, an activity possessed by the ribosome.

o In an elongation step known as translocation, the ribosome shifts 3 nucleotides along the mRNA toward the 3’ end.

o The tRNA that carried methionine is carried to the E site where it can exit the ribosome.

o Then the tRNA that is in the A site is moved to the P site.

o Translocation requires the expenditure of another GTP. 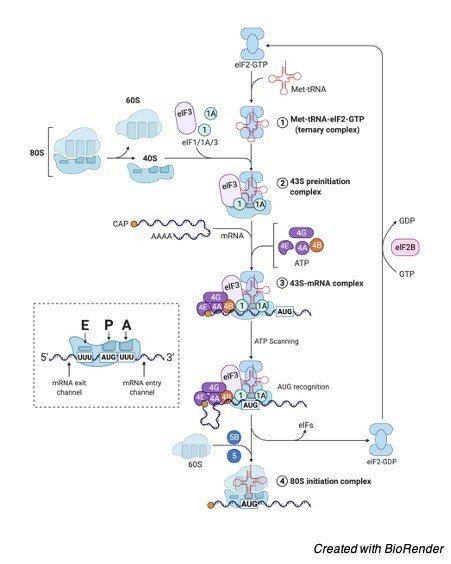 o Translation ends when a stop codon (UAA, UAG, UGA) is reached in a step called termination. When a stop (or nonsense) codon reaches the A site, proteins known as release factors bind to the A site allowing a water molecule to add to the end of the polypeptide chain.

o The protein is released and the rRNA breaks up into its subunits and waits for it to be used again in another round of translation Even as the polypeptide is being translated, it begins folding.

o The amino acid sequence determines the folding conformation and the folding process is assisted by proteins called chaperones.

o In post-translational modification, sugars, lipids, or phosphate groups may be added to the amino acids.

o The polypeptide may be cleaved in one or more places, or other polypeptides might join to form a quaternary structure.

o Translation may take place on a free floating ribosome in the cytosol producing proteins that function in the cytosol or a ribosome may attach itself to the rough ER during translation and inject the protein into the ER lumen.

o Proteins injected into the ER lumen are destined to become membrane bound proteins of the nuclear envelope, ER, Golgi, plasma membrane, or to be secreted from the cell.

o Free floating ribosomes are identical in structure to the ribosomes that attach to the ER.

o The growing polypeptide may or may not cause the ribosome to attach to the ER depending upon the polypeptide.

o A 20 amino acid sequence called a signal peptide near the front of the peptide is recognized by protein-RNA signal- recognition particles (SRPs) that carries the entire ribosome complex to a receptor on the ER.

o The peptide is actually pulled through the membrane through an ATP driven process.

o The signal peptide is also usually removed by an enzyme.

"Signal peptides may also be attached to polypeptides to target them to mitochondria, the nucleus, or other organelles"