○ All RNA is manufactured from a DNA template in a process called RNA transcription.

○ The beginning of transcription is called initiation.

○ In initiation, a group of proteins called initiation factors finds a promoter on the DNA strand, and assembles a transcription initiation complex, which includes RNA polymerase

○ A promoter is a sequence of DNA nucleotides that designates a beginning point for transcription, and promoter recognition is the rate limiting step in transcription.

○ The promoter in prokaryotes is located at the beginning of the gene (said to be upstream).

○ The transcription start point is part of the promoter.

○ The first base-pair located at the transcription start point is designated +1; base-pairs located before the start point, such as those in the promoter, are designated by negative numbers.

○ The most commonly found nucleotide sequence of a promoter recognized by the RNA polymerase of a given species is called the consensus sequence.

○ Variation from the consensus sequence causes RNA polymerase to bond less tightly and less often to a given promoter, which leads to those genes being transcribed less frequently.

○ Next the complex switches to elongation mode.

○ Only one strand in the molecule of double stranded DNA is transcribed.

○ This strand is called the template strand or (-) antisense strand.

○ The other strand, called the coding strand or (+) sense strand protects its partner from degradation. 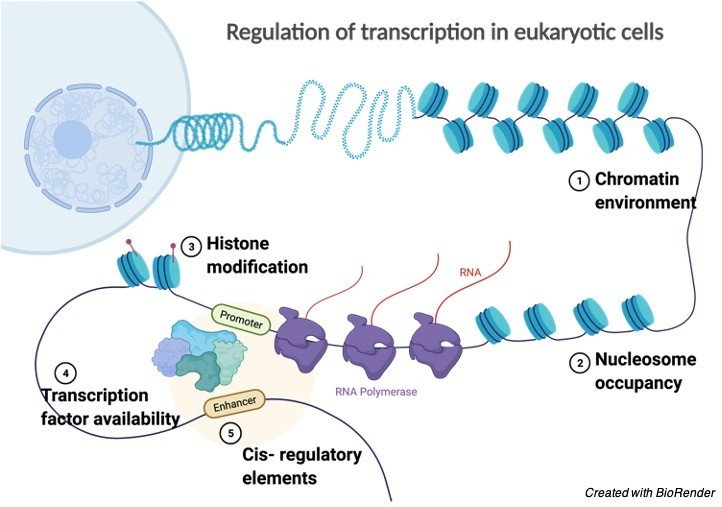 ○ Just like DNA polymerase, RNA polymerase reads in the 3’ → 5’ direction and builds in the 5’ → 3’ direction, but it DOESN’T have proofreading ability.

○ The end of transcription is called termination, and requires a special termination sequence (high G-C content) and special proteins to dissociate RNA polymerase from DNA.

○ Genes are activated or deactivated at the level of transcription.

○ For all cells, most regulation of gene expression occurs at the level of transcription via proteins called activators and repressors.

○ Activators and repressors bind to DNA close to the promoter, and either activate or repress the activity of RNA polymerase.

○ Activators and repressors are often allosterically regulated by small molecules such as cAMP.

○ The primary function of gene regulation in prokaryotes is to respond to the environmental changes.

○ In contrast, lack of change or homeostasis of the intracellular and extracellular compartments is the hallmark of multicellular organisms.

○ The primary function of gene regulation in multicellular organisms is to control the intra- and extracellular environments of the body.

○ The genetic unit usually consisting of the operator, promoter, and genes that contribute to a single prokaryotic mRNA is called the operon.

○ Genes of an operon are transcribed on one mRNA.

○ Genes outside the operon may code for activators and repressors

○ An operator is a segment of DNA that a regulatory protein binds to.

○ It is classically defined in the lac operon as a segment between the promoter and the genes of the operon.

○ A repressor or activator can bind to an operato.

○ A good example of an operon is the lac operon.

○ The lac operon codes for enzymes that allow E. Coli to import and metabolize lactose when glucose is not present in sufficient quantities.

○ The activated CAP protein binds to a CAP site located adjacent and upstream from the promoter to the lac operon.

○ The promoter is now activated allowing the formation of an initiation complex and subsequent transcription and translation of the 3 proteins. 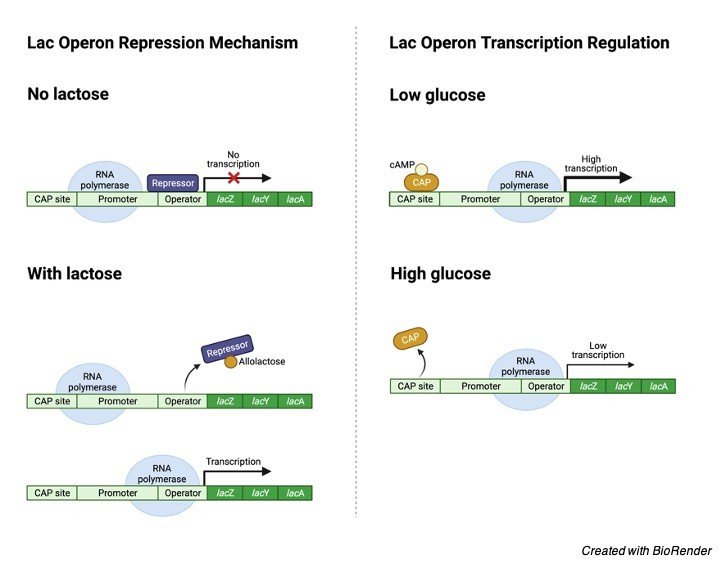 ○ A second regulatory site on the lac operon, called the operator, is located adjacent and downstream to the promoter.

○ The operator provides a binding site for a lac repressor protein.

○ The lac repressor protein is inactivated by the presence of lactose in the cell.

○ The binding of the lac repressor to the operator in the absence of lactose prevents the transcription of the lac genes.

○ Lactose, then, can induce the transcription of the lac operon only when glucose is not present.

○ Gene regulation in eukaryotes is more complicated involving the interaction of many genes.

○ Thus more room is required than is available near the promoter.

○ Their function is similar to activators and repressors, but they act at a much greater distance from the promoter.