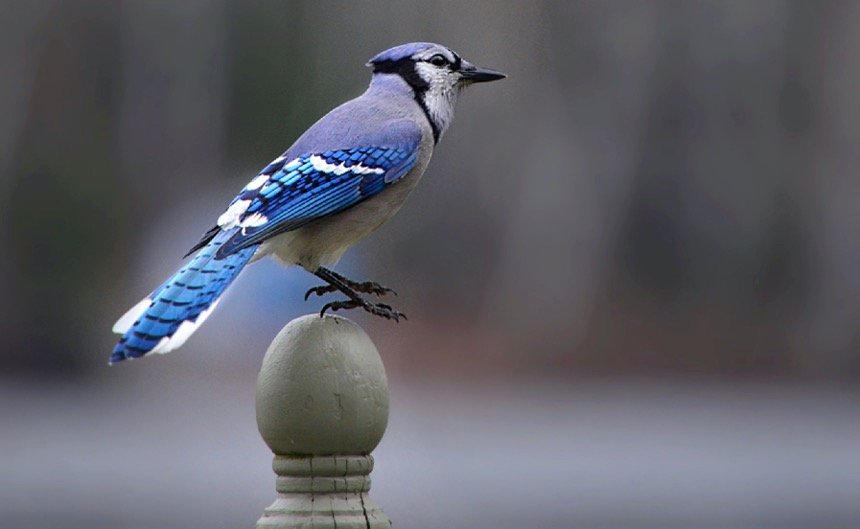 The Blue Jay’s distinct personality, as well as its proclivity for utilizing its own name as a bird cry, contribute to the blue jay’s ability to communicate effectively. When it comes to the lovely and graceful blue jay, Mark Twain had this to say about it: “There’s more to a jay than any other creature.”

In addition to being a passerine bird, the blue jay is a native of North America and may be found across the eastern and central parts of the United States. Some populations of this bird have even been observed to migrate in order to find a new home.

• These birds’ feathers contain a brown pigment that gives them their colour. They are, however, a bright shade of blue. Blue is the least frequent hue in nature, which makes blue jays a particularly rare blue creature.

• These birds have been observed rubbing ants against their feathers.

• They are capable of imitating hawk calls.

• They are said to become noisier as the fall season approaches, and to become more quiet during the spring and summer months.

The blue jay is scientifically known as Cyanocitta cristata, and it is a member of the Corvidae family of birds. It is a member of the Aves class and belongs to the kingdom Animalia. They were given the moniker blue “jay” because of the noises that they are known to make that sound exactly like the blue bird of paradise.

It can be found predominantly in the southeastern United States in Nebraska, Kansas, Oklahoma, and certain sections of Wyoming and Texas, but it can also be found in other parts of the country, including Canada.

Appearance and Behavior of the Blue Jay

This bird’s color is blue, as implied by its name. But the color comes from a brown pigment found in their feathers, which is what gives them their distinctive appearance. The bird is approximately 9 to 12 inches in height and weighs approximately 2.5 to 3.5 ounces.

The top of the bird’s head is blue, and the color of its fur changes to grey or white as it gets closer to its throat. This grey or white coat continues down to its chest and further down to its stomach. The bird’s crest on its head is greyish blue, and it has a black and white ribbon on its tail and wings, which distinguishes it from other birds of the same species.

Across the bottom of its throat, there is a black band that appears like a necklace. The blue jay is known to be an aggressive creature with strong territorial instincts, and its behavior reflects this.

These birds are not afraid to attack any potential intruders or predators that they perceive to be a threat to them. Despite the fact that they are violent, they are gregarious and tend to congregate in groups. This bird is also known for being extremely talkative, and it is not uncommon for it to create a variety of noises in order to communicate.

It is particularly well-known for making a ‘jay-jay’ sound, which is also the source of its name. Growling, chattering, and whistles are some of the various sounds that this bird makes, among others.

Habitat for the Blue Jay

The eastern and central sections of North America are the most prevalent locations where these birds can be found. However, it is also known that they are expanding their range to the northwest of the country. They also enjoy coniferous woods and can be found in southern Canada, in addition to the United States and other regions of the world.

Blue jays are typically found in low-lying woodland settings, and they like to nest in beech and oak trees, among other types of trees.

They can frequently be found in city parks and are clearly distinguishable due to the fact that they are one of the most colorful and loudest birds on the planet and are therefore quite difficult to miss. It is also usual to see the bird in densely populated places, such as urban settings.

Diet of the Blue Jay

The diet of these birds, which are known to be primarily vegetarian, consists primarily of nuts, acorns, and seeds. Beetles, grasshoppers, and caterpillars are all part of their diet, as well as other insects. Aside from that, these birds have been observed to consume eggs and nestlings. As a result, they are omnivorous.

These birds, like every other animal or bird, play a crucial role in the ecosystem’s functioning. Many predators within the bird family are a threat to the blue jay’s survival, including several species of owl. Some of them are falcons, hawks, and owls, to name a few.

A variety of animals including crows, raccoons, squirrels, and other birds will feed on the nestlings or babies of blue jays, a practise that the blue jays have become well-known for. Other threats to blue jays include collisions with man-made structures, which the birds may encounter while flying through urban areas.

Meanwhile, various viral and bacterial infections may also be responsible for the deaths of these birds. The International Union for Conservation of Nature has, on the other hand, classified these birds as “least worried.”

Reproduction and Life Cycle of the Blue Jay

Blue jays are well-known for being birds that form lifelong partnerships with their mates until they die and for demonstrating exceptional partnering skills when it comes to raising their young. The male companions for the female jays are usually chosen by the females.

The process begins in the late winter months. After the baby blue jay is created, the mother and father begin to construct many partially constructed nests for their unborn offspring in preparation for their arrival. After a few attempts at nest construction, the pair usually settles in one area.

With the help of moss, twigs, foliage, leaves, and barks, the nests are finally ready to be built and used. The gestation period in these birds normally lasts between 16 and 18 days, depending on the species.

The female blue jay lays three to five eggs, after which she sits on them for a little more than two weeks to incubate them. During this time, she is fed and cared for by the male blue jay, who is her primary caregiver. Immediately following the egg’s hatching and the arrival of the infant, the family stays in the nest for two months before returning to their home to be with the rest of their family for a bit.

It is during this time that both the male and female blue jays share the job of feeding and caring for the offspring. Blue jays are reported to survive for between 17 and 26 years in captivity, which is longer than the normal lifespan of seven years for the species.

There are around 13 million blue jays in the globe, according to current estimates. However, between 1960 and 2015, the number of blue jays in the wild declined by approximately 28 percent.