What is Cell Differentiation and Development?

Plant develops from a single celled zygote to multicellular, tissue level coordinated living being by the process of development and growth.

The development, growth, distinction between different parts of a organisms is determined by the genetic material by a gradual process of cell division.

Cell division is the primary process where continuous division leads to a pattern formation. The pattern formed is based on the symmetry of the division and the cytoplasmic distribution during cell division.

When a zygote becomes an 8 – celled blastomere the cytoplasmic contents of one cell are evenly or unevenly distributed in all cells.

Further, positioning of an embryo and environmental cues differentiates the cell further making each part of the cell a distinct and specified region.

This overall mechanism is a gradual process involving commitment, determination and differentiation. 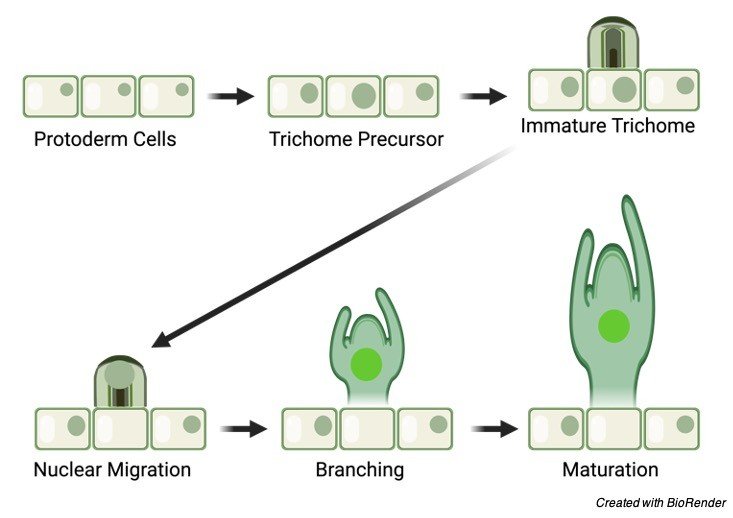 The 3 processes are overlapping with negligible differences. Commitment is the determination of cell fate of a particular cell. Determination is similar to commitment where a part of the embryo gets determined to develop into a particular organ.

Differentiation is the process where the determined part divides and transforms to a specialized region with definite structure and function.

Elongation of leaves will initiate matured cell to dedifferentiate to gain its embryological function of continuous proliferation to attain desirable growth after which the cells attain its specific role which is redifferentiation.

Cell division is crucial in differentiation of group of cells according to its functional and structural specificity.

The unequal distribution of proteins and other essential nutrients at each cell division to daughter cell determines the determination of each part and its differentiation.

The distribution may be supported by the cytoskeleton which transports and orients the nutrients appropriately.

Many scientists claim the asymmetrical cleavage leads to the formation of different parts. Formation of sieve cells, companion cells trichoblast are result of asymmetrical division of zygote.

The synthesis of protein and gene expression varies the mother cells composition from daughter cells.

In both the division the accumulation of varying composition of cytoplasm is essential in cell differentiation.

During such division the daughter cells does not inherit all the ability of mother cell. Each division restricts the differential ability of the cell making it more specific in nature.

Differentiation is by limiting gene transcription and expression of a cell which defines a cell’s function.

Other functions apart from prescribed function are eliminated or not expressed. Each differentiated region has separate function and specialized materials present in them.

For example: Mesophyll cells in leaf has 40 – 50 chlorophyll, 106 photoreceptors, chlorophyll a and b, enzyme essential for photosynthesis namely RUBISCO – Ribulose 1,5 – bisphosphate carboxylase/oxygenase.

Similarly in root cell, lacks chlorophyl, photoreceptors proteins of chlorophyll instead they carry starch storing plastids namely amyloplast. Both leaf and root contain same genomic DNA but expression of gene and other activities determines the part which the cell must occupy.

The mechanisms are monitored by 3 types of gene namely:

Housekeeping genes are common genes which are widely present at any part of the body doing respiratory, storage sugar uptake, protein synthesis etc.,

Cell or tissue specific genes are present in all types of cells or tissue but gene expression is limited to a cell type or tissue.

a. Chlorophyll proteins, photoreceptors, RUBISCO enzyme are present only in the mesenchymal cells.

b. Amyloplast are present only in roots for storage purpose in parenchymal cells

Regulatory genes, synthesis proteins involved in signaling. These are encoded by multigene complexes known as Homeobox genes which are specified in determining the pattern for future differentiation.

For example: Plant Homeobox genes determine the patterning of the future structure, determination of cell fate, defining boundaries between different tissues and organs.

KNOX I genes are specified for patterning shoot meristem and differentiates them from lateral organs by not expressing them in lateral part of the plant.

As a whole differential gene expression and inhibition combinedly forms differentiated parts of the tissue or plants.

a. Endopolyploidy is observed in Angiosperm – chromosomes differentiate number of times without cell division is known as endopolyploidy.

A matured cell changes its metabolic activity and modifies its gene function and attains its zygotic cell division abilities to divide and differentiate to new cells.

a. Loss of stored food