What is Cell Wall?

Outside the plasma membrane is another layer called as the cell wall. It is very important to the cell as it provides tensile strength, firmness and protection from the outer environment.

Cell membrane keeps the cell secured from the stress with the help of the cell wall and separates cell content from the outer environment. Cell wall is seen in plants, protist, fungi and majorly all bacteria excluding mycoplasma. Animals as well lack cell wall.

The cell wall can be differentiated from cell membrane in various features and are:

c) Cell membrane is seen in all types of cells whereas cell wall is seen in protist, fungi, plants and other bacteria.

e) Cell membrane is made up of carbohydrates, fatty acids and protein, however cell wall composition is dependent on the organism present.

As the cell membrane is delicate, thus to protect the internal organelles and the genetic material, cell wall provides protection to the cell from outer environment. It also helps to provide shape to the cells.

Cell wall also has other function such as when too much of water has entered the cell, cell wall will prevent the cell from damage and contraction. Thus, to avoid this cell only permits tinier molecules to move, preventing unnecessary drugs and toxins to pass through.

Cell wall structure varies from species to species. In plant’s cell wall it consist of cellulose, hemicellulose, pectin along with other polymers such as lignin, cutin and suberin. Algal cell wall are made up of agar and carrageenan such as polysaccharide, which are present in plants. Fungal cell walls are composed of N- acetylglucosamine, a chitin polymer. Bacterial cell wall is made up of peptidoglycan which is further composed of NAG and NAM residues.

Plant cell wall is made up polysaccharides such as hemicellulose, cellulose, pectin which encapsulates the cell making the cell survive the stress from the outer environment. Through glycan cross linkage are polysaccharide linked to each other forming a complex structure. 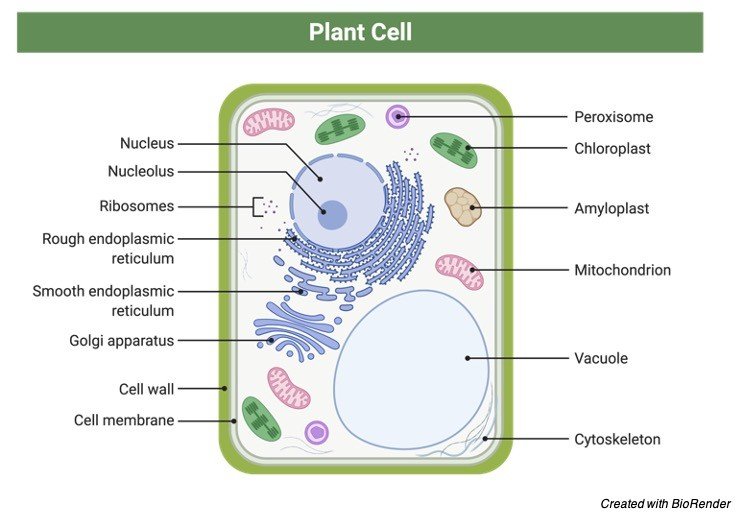 The secondary cell wall is loaded with lignin and is thicker than the primary cell and doesn’t allow the movement of water across it. Between the two-cell wall is the lamella present which is rich in pectin and keeps the cells intact together.

What is the Function of Cell Wall in Plant Cells?

The various function of plant cell wall are:

a) Providing support to the cell

d) Movement of material from the cell and the environment

Fungi are eukaryotes and possess cell wall which safeguards them from being harmed. In fungi, the cell wall and cell membrane remain connected to each other. The basic function of cell wall is to protect the cell from the outer environment, stress, provides strength, rigidity, prevents from bursting open, controls the movement of solutes and integrity.

Thus, the antifungal drugs usually try to approach that area to obtain selectivity and specificity. Fungal cell wall possess a high molecular weight pigment called melanin, which is negatively charged. As melanin is hydrophobic to water it allows the cell to survive from high temperature, toxins, UV light. This is one of the major mechanisms of fungal cell to protect itself from host, however melanin could stop inducing phagocytosis and host immune response.

Cell wall of fungi can also be made up of another polysaccharide called glucan, which links itself to 1 and 3rd glucose molecule. Another polysaccharide found in fungi is chitin, having a dry weight of about 2% in yeast and in fungi around 10-20%. With the help of the enzyme N-acetylglucosamine chitin can be synthesized which gets piled in the extracellular space of cytoplasmic membrane. Proteins form a dry weight of about 20-30% in fungi and 30-50% of dry weight in yeast cell.

Molds are protist which looks like fungi. They could be seen on walls or in water ex slime molds and water molds. As they look like fungi they lack chloroplast, feed on dead matter but possess cell walls, made up of cellulose but does not contain chitin, which is a common feature of fungi.

Both bacteria and archaea are both prokaryotes. The cell provides tensile strength and is rigid. The cell wall of prokaryotes also serves as the site of action to check the activity of the drug.

Teichoic acid regulates movements of cations, prevents cell lysis. It also helps to detects the cell as it possess antigenic character. The peptidoglycan is composed of repeating unit of disaccharide forming a structure of NAG and NAM residues respectively.

These N-acetyl glucosamine and N- acetyl muramic acid repeating units form the backbone linked by polypeptides. The mechanism of action of penicillin is also the same, it attacks the cell wall by disrupting the linkage and damaging the cell due to loss of structure.

Gram negative cell wall consist of a thin peptidoglycan layer, followed by an outer membrane. In between these 2 layers lies the periplasmic space. As the peptidoglycan layer is thinner it has more chances of getting damage from the outer environment.

Lipoproteins, lipopolysaccharide and phosphate is present in the outer membrane. Outer membrane shows resistance to bile salts, antibiotics, enzymes, detergents and various other things. There are pores present on the outer membrane which allows the entry of biomolecules such as amino acids, carbohydrates, vitamins and fluids.

There is a lipid molecule present in the outer membrane called Lipid A. After the cell has died, lipid A is released. As gram positive cell wall has teichoic acid, in gram negative lipopolysaccharide is attached to lipid A.

The function of lipid A is that it acts an endotoxin causing vessel dilation, fever, blood clotting and others. Archaeal cell walls are composed of not peptidoglycan but proteins and polysaccharide. When archaea is seen under microscope it resembles gram negative bacteria although they are devoid of peptidoglycan.