In biology, a codon refers to a basic genetic unit of the life which acts as the template for the amino acid for the production of protein expressions.

The information that are required for the is stored in the form of genes and it expresses protein for the modality through which the information is encoded on the genes to be expressed. Thus the codon is considered as an essential genetic unit of life.

A codon is a specific sequence of the nucleotides on the mRNA which corresponds to a particular amino acid.

A codon also acts as a stop signal during the process of protein translation.

We all are familiar that nucleotide is made up of a nucleobase, a sugar and a phosphate group.

Do you all know how many of nucleotides make up the codon? Yeah, a sequence of about three nucleotides makes up a codon. In other way it can also be said that a three-nucleotide sequence make up a single codon on the mRNA.

The basic nucleotides of RNA are Adenine, Guanine, Cytosine and Uracil. You may then get into doubt how such three nucleotides are form?

A codon is typically made up of three nucleotides in a combination of AUG, UCC, UGA which all codes for a particular amino acid. And then it is also important to know what does codon codes for?

All the collection of codons on the mRNA forms a genetic code, a codon is generally a smallest unit of a genetic code, in simple terms, it can also be said that each codon encrypts a specific amino acid.

It has also had the capability of coding for a signal to start or stop the process of the protein synthesis in a particular cell.

Codon is usually defined as the amino acid which acts as coding unit in the messenger RNA or in a DNA. The codons which are present in the form of strings on the mRNA describes about the order of the amino acids in an encoded protein.

Apart from these amino acids, these are also few codons which specifically works on the start and stop signals.

Each codon contains a set of three adjacent nucleotides, which are called as triplets in the base pair of the mRNA, as three bases of the corresponding anticodon of a tRNA molecule which carries a particular amino acid.

The ribosome which is considered as an important organelle for the synthesis of proteins has binding sites for the tRNAs which helps in matching their corresponding codons in the mRNA.

Before understanding about the function of codon, It is very much important to know about the process of translation.

Let us consider here an example of the cellular process which explains us about the connection between a codon and amino acid.

Each of the DNA is made up of number of genes which carries the important functions that is very much essential for the life and thus generates a response for the creation of vital protein molecules.

This expression of the gene entails the synthesis of the encoded proteins through this.

Thus, the synthesis of proteins is carried out through two steps, which are known as transcription and translation.

Transcription is the first step involved in the process of synthesis of proteins. Here DNA acts as a template for generating the messenger RNA.

During this process of forming mRNA, the information that has been encoded in the DNA for each of the protein is transferred into mRNA. Thus, DNA acts as a template for a complementary base pairing for transferring the information of protein expression into the mRNA.

Translation: An mRNA is one of the single stranded nucleic acid. The genetic information that is carried in it is acquired from the molecule of DNA by the process of transcription.

The genetic code includes codons which will be translated into the proteins. Thus, the codons and the amino acids are related to each of them and are very important for processing the life.

Anticodon is also considered as a trinucleotide sequence, which are found in the tRNA.

These are nucleotide sequences that are being found complementary to the base sequence of the mRNA.

The presence of these anti codons on the transfer RNA ensures whether the suitable amnio acid is introduced into the protein structure.

Generally, codons are classified into two types, as signal codons and the non-signal codons.

The signal codons are the codons which provides the signal during the process of translation, these codons are further classified as start and stop codon.

The non-signal codons are primarily used for the process of translation, which activates typically after the translating of start codons. 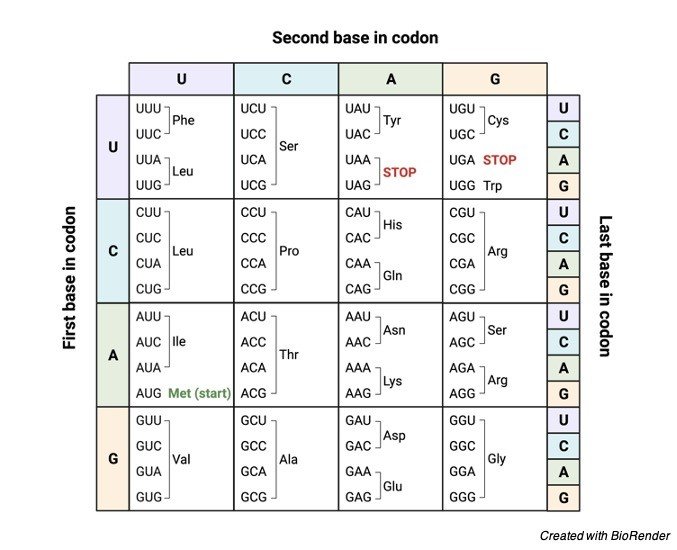 The codons can also be classified in a different way that whether the codon codes for an amino acid or not.

Generally, there are about 64 codons. Out of these 64 codons, only 61 codons codes for twenty amino acids and the rest of them codes for the codon signals.