A cell’s, an organism’s, or an individual’s genetic makeup influences its traits or phenotype.

What is a Genotype?

The terms genotype and phenotype are used to describe an organism’s characteristics or traits which identify alleles that are linked to a single trait (e.g., Aa) or a group of traits (e.g. Aa Bb cc). The term can be used to refer to an organism’s entire gene pool (or a taxon) that shares some similarities with the term genome, which refers to all of an organism’s DNA at this level.

However, genes do not make up all of the DNA. A collection of characters encoding the alleles for each of the 20,000 or so known genes in the human genome would be required to completely write down an organismal genotype.

The phenotype is the result of the genotypes’ expression and describes the physical or physiological characteristics of an organism. The genotype, however, is not the only factor that influences an individual’s phenotype, but various environmental variables also play a role, and they impact gene expression to define an organism’s particular phenotype.

Genes in most eukaryotes come in pairs known as alleles, which are found on the same chromosome (called a locus). They’ll be in charge of the same trait as well. The term “allele” refers to a gene variation. Because most eukaryotes reproduce sexually, each parent contributes one of a gene’s two alleles.

Random replication faults and environmental interactions with DNA have resulted in various alterations of each parent’s genes because each parent is the product of a separate lineage of creatures. This distinction is the source of the term “allele,” (allo = other), which means “other” or “different.” If the trait is inherited in a simple Mendelian pattern, one of the alleles will be expressed and the other will not.

The term “homozygous” is used to characterize the pairings “AA” and “aa” since their alleles are identical, i.e. both dominant and recessive. The allelic pair “Aa,” on the other hand, is referred to as “heterozygous.” Individuals with genotypes AA or Aa will show the dominant characteristic, while those with genotype aa will show the recessive trait.

Many genes contain many allelic variations, and not all gene pairs have a simple dominant/recessive connection, hence not all attributes are determined by a single gene.

A non-Mendelian kind of inheritance includes codominance, incomplete dominance, and polygenic inheritance. Many of the observable qualities in humans are non-Mendelian; height and skin colour, for example, are determined by the interplay of multiple genes at multiple loci, not just a pair of alleles.

The alleles for only one or a few attributes are given in simple genotypes. Two alleles, R and r, reflect the genotype of the gene that affects the colour of the flower, for example, in which the dominant allele is “R,” while the recessive allele is “r.” The Red flower trait is coded by the dominant allele, while the white flower trait is coded by the recessive allele. Take a look at the image below for a visual representation of the chart. 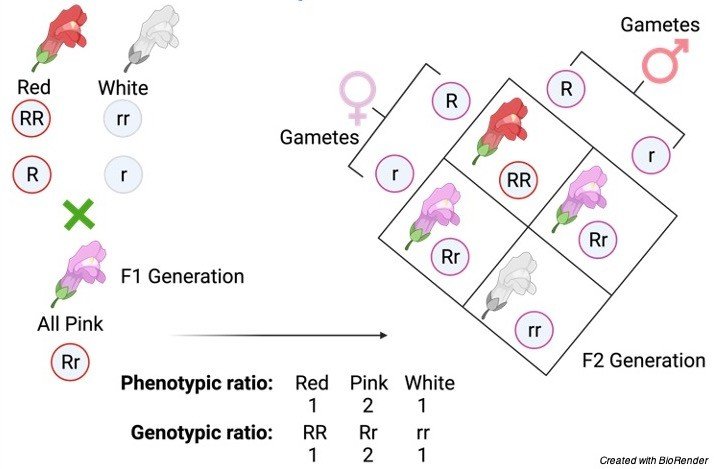 This is an example of a Punnett square, which was initially developed by Reginald Punnett after Mendel’s work was rediscovered. In genetics, the Punnett square is used to predict inheritance patterns and ratios. The genotype and phenotype of the offspring of two heterozygous (Rr) parents, both with pink blooms, are shown in this square.

The alleles contained in the parental gametes, as well as the progeny produced by various combinations of those gametes, are depicted in the diagram. Each parent creates two types of gametes (R and r), which are mixed together in every feasible combination.

Two of the four progeny are homozygous, one red (RR) and one white (rr), while the other two are heterozygous (Rr), both exhibiting pink as the dominant characteristic. This results in Mendel’s 3:1 phenotypic ratio of dominant: recessive phenotypes. It also tells us the genotypic ratio of RR, Rr, and rr genotypes, which is 1:2:1.