Various definition has been proposed for incomplete dominance:

a. The incomplete dominance is referred to as the dilution of the dominant allele with respect to the recessive allele, resulting in a new heterozygous phenotype.

For example, the color of flower is pink which is the combination of red (dominant) and white (recessive), the shape of hairs, hand sizes, voice pitch in humans.

b. The intermediate trait appearance in between the phenotypes of homozygous traits in the heterozygote is called incomplete dominance.

c. The formation of a third phenotype specifically with traits that results from the combination of parent alleles is known as incomplete dominance or

d. The incomplete dominance is referred to as intermediate inheritance in terms of trait expression, and none of the alleles from the paired alleles expressed over the other for a specific trait.

In addition to these, various assumptions have been put forth for incomplete dominance; somewhere they are defined as combination of parent allele expressing both dominant and recessive trait.

Whereas others define it as a phenomenon where creation of heterozygote holds an intermediate trait between the homozygous ones.

Moreover, some define it as less intense than the dominant trait in the new offspring, thus concluding the trait neither dominant nor recessive.

In this, an intermediate heterozygote is formed instead of genotypic homozygous alleles expressing over one another.

Variation of the characteristic of organism is exclusively expressed by incomplete dominance, thus, making it a key factor in character expression.

When a heterozygous is made because of the crossing of true breeding parent it is termed as incomplete dominance.

Here alleles don’t present as dominant or recessive instead the allele which is prominent is expressed in less ratio.

In genetics incomplete dominance is studied as a global phenomenon which provides rise to the variation in appearance additionally as physiological variations.

It is not true always as in many cases it might be absent furthermore as well.

An allele is a set of gene expressions and an individual comprises of 2 alleles from either parent for 1 gene.

There can be many alleles for one gene and is known as Multiple alleles.

A pack of genes that are passed down through generations and gets inherited by the offspring which imparts distinct characteristic physical features is known as the genotype while the offspring’s features, the way they look, characteristics, behaviour, and development is termed as phenotype.

The frequency of trait seen in the offspring after crossing the genes or alleles of the specific trait identified through the genotypic ratio and is best studied through the Punnett square which gives all the possibilities of possible traits of the new offspring in presentable form after the crossing of homozygotes.

Genotypically, alleles are either dominant or recessive. However, the phenotypic expression of this alleles is because of the dominance of that particular allele.

In complete dominance, there’s no difference in phenotypic characteristic between heterozygous and homozygous genotypes, that is between TT and Tt genotypic trait.

For instance, the phenotypic characteristic may be similar in cases of AA and Aa genotypic trait of complete dominance.

However, it is less expressive in incomplete dominance trait. Thus, a heterozygous genotype Aa expresses character in between AA and aa genotype, or a less dominant character than a homozygous dominant trait.

In past Mendel performed various experiments. In his experimentation with pea plants’ trait (round and wrinkled) complete dominance has been expressed.

He crossed round and wrinkle peas where the plants with round pea shows dominance allele, while those with wrinkle exhibit recessive allele.

In a similar fashion, Carl Correns carried experiment on four o’clock flowers, where he uses two true-breeding flowers of red color (dominant trait) and white color (recessive trait) and crossbreed both of the flowers.

However, the results did not match with Mendel’s experiment, where the offspring of the flower comes out to be pink in color not showing any dominant trait of red color flower.

This is the best golden standard example of incomplete dominance. 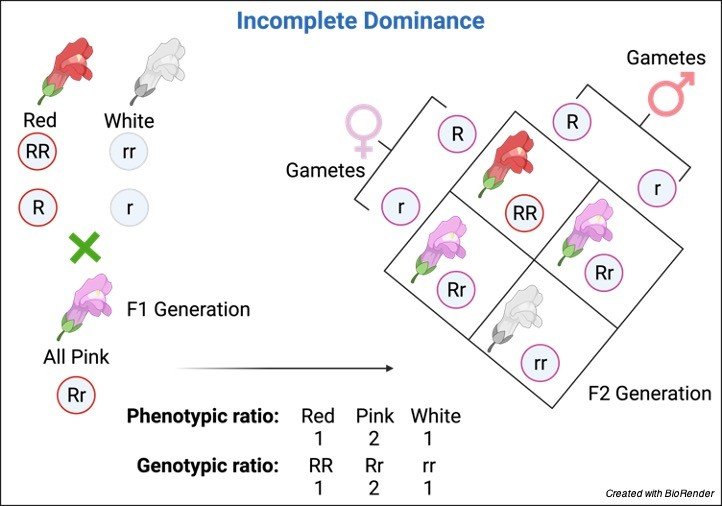 How Does Incomplete Dominance Work?

To completely gain the knowledge about the mechanism of incomplete dominance, various botanist had taken into consideration the Punnet square.

It foretells the genotypic pattern of the breeding group. In the case of Carl Correns, two plants were taken into consideration where one produce red flowers (dominant) while the other produce white (recessive) one.

After their first cross, the mixture of homozygous alleles (F1 generation) displays red flowers, while the heterozygote offspring will have the bridging trait exhibiting pink colour flowers.

This shows that no allele is dominant over the other and they did not mask the effect of the other as well.

After the second cross breeding, F2 generation shows 25% of the red flowers 25% white flowers and 50% of pink flowers which resembles the ratio of 1:2:1 proposed by Mendel in his experiments.

This results states that incomplete dominance does not necessitates absolute blending since the heterozygote possesses both separate traits or alleles, here in the form of red and white flowers in the F2 generation.

Though the genotypic trait is same as in Mendel’s experiment, phenotypic characteristic differs.

In addition to this, though the descendant possesses both alleles, the gene which bridges between the parents get featured phenotypically.

Codominance is defined as a variant of inheritance where the alleles of a gene club in groups of 2 in a heterozygote are fully expressed.

Thus, the phenotype of the descendant is a mixture of the their parents.

Hence, the trait can neither be considered dominant nor recessive.

Thus, both the dominant and recessive alleles are phenotypically attributed and featured. 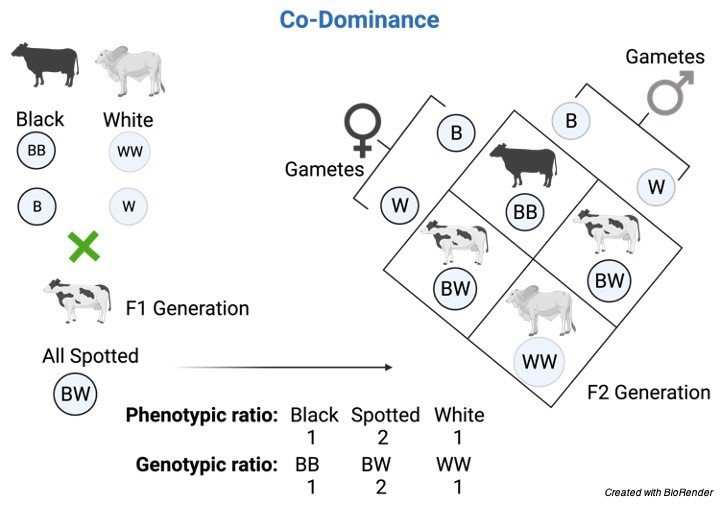 Mendel defined laws of inheritance featuring the dominant factors in inheritance and phenotypically expressing the gene.

However, he did not mention anything about the incomplete dominance and codominance.

Thus, suggesting both of these dominance as different types of inheritance.

There are several botanists who started working in the field of inheritance where they define both the terminologies and elaborated them.

However, sometimes both dominances are mixed up, so, it is of paramount importance to check the primary factors that differentiate them.

What is Microscope? A microscope is a laboratory instrument used to examine objects that are too small to be seen by the naked eye. It is derived from Ancient Greek words and composed of mikrós,

Table of Contents Secretion Definition The method of moving molecules manufactured within a cell to the space outside of the cell is referred to as secretion. Usually, these secreted substances are called functional proteins. However,

Table of Contents Photoautotroph Definition The organisms that can make their energy in presence of light and carbon dioxide are known as photoautotrophs. The process of preparing their own food is called photosynthesis. The word