o Concentration of ions inside and outside a cell are very different:

o Na+ is more plentiful outside the cell

o Cl- is more plentiful outside the cell

o K+ is more plentiful inside the cell

o A couple rules dictate the permeability of solutes and ions:

1) The smaller the molecule the more permeable it is.

2) the lower the polarity, the more permeable it is.

3) Lipid bilayers are impermeable to all ions and charged molecules, no matter how small they are.

o For molecules with a charge there is also an electrical gradient pointing in the direction that a positively charged particle will tend to move.

o The two gradients can be added to form a single electrochemical gradient.

o The electrochemical gradient for compound X points in the direction that particle X will tend to move.

o In strict terms, diffusion occurs in the direction of decreasing free energy and in increasing universal entropy.

o The ion flow changes the voltage across the membrane.

o The membrane potential, thus altering the electrochemical driving forces for the transmembrane movement of all the other ions. 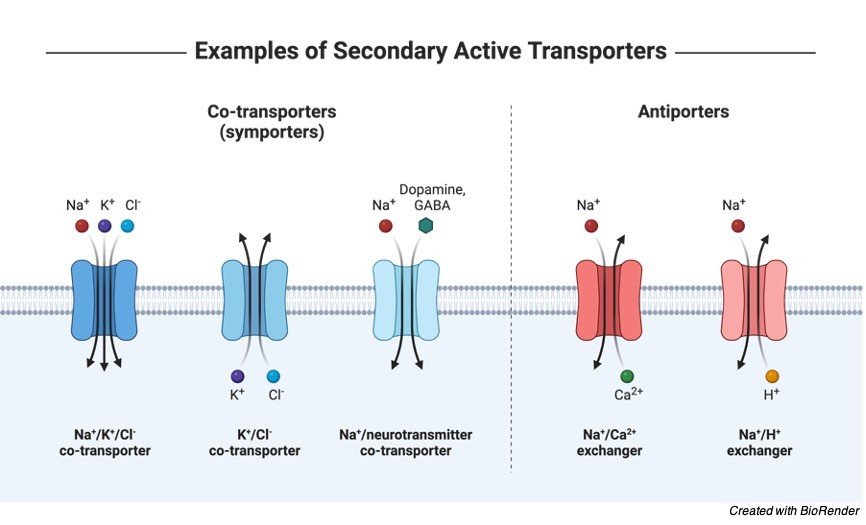 o If compounds X and Y are separated by an impermeable membrane, diffusion is stopped.

o However, if the molecules of X can wiggle their way across the membrane then diffusion is only slowed.

o Since the membrane slows the diffusion of X, but doesn’t stop it, the membrane is said to be semipermeable to compound X.

o Most of the diffusion of polar and charged molecules across a natural membrane takes place through incidental holes (sometimes called leakage channels) created by the irregular shapes of integral proteins.

o This is passive diffusion (down its electrochemical gradient).

a) allows passage only to solute molecules that fit into the binding site on the protein. Bind their solutes with great specificity much like how enzymes do

a) discriminates mainly on the basis of size and electric charge

b) Most of the channel proteins in the plasma membrane of animal and plant cells are quite different and have narrow, highly selective pores.

o Almost all of these proteins are ion channels.

o There are three types of ion channels:

i. Voltage gated ion channels: probability of being open is determined by the membrane potential.

ii. Ligand gated ion channel: controlled by the binding of some molecule (the ligand) to the channel protein.

iii. Stress-activated channel: opening is controlled by a mechanical force applied to the channel.

o Ex. In your ear

o Ion channels are either fully open or fully closed.

o Facilitated diffusion is diffusion in which the molecule cant naturally diffuse (because of its size, polarity or both) across the membrane so one of these membrane transport proteins assists it.

o It is still down the electro-chemical gradient however.

o Most, but not all, human cells rely on facilitated diffusion for their glucose supply.

o Only certain epithelial cells in the digestive tract and the proximal tube of the kidney are capable of absorbing glucose against a concentration gradient.

o This is done via a secondary active transport mechanism down the concentration gradient of sodium.

o In the absence of insulin, only neural and hepatic cells are capable of absorbing sufficient amounts of glucose via the facilitated transport system. 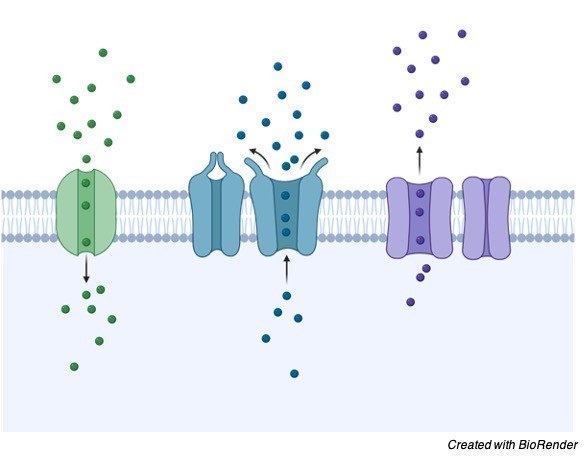 o Facilitated diffusion is said to make the membrane selectively permeable because it is able to select between molecules of similar size and charge.

o To move a solute against its concentration gradient, a transport protein must do work: it has to drive the “uphill” flow by coupling it to some other process that provides energy (usually via ATP hydrolysis or through coupling it with a “downhill” movement). This is called active transport.

"Ion channels are either fully open or fully closed"

o If both solutes move in the same direction its called symport.

o If they move in opposite directions its called antiport.

o If a carrier protein ferries only one type of molecule across the membrane (and is therefore not a couple transporter) its called a uniport. 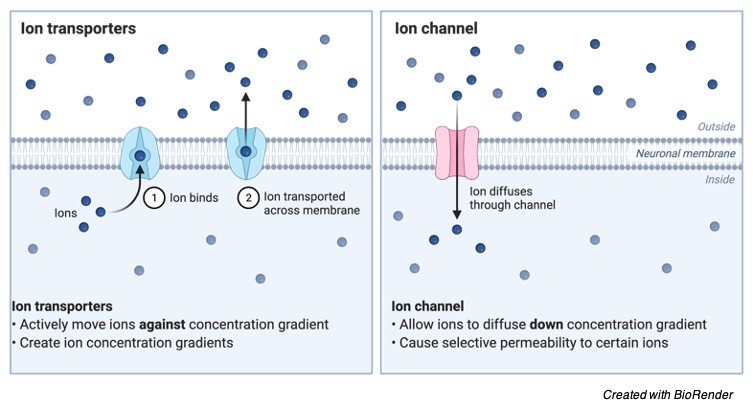 o Under normal conditions, the interior of most cells is at a negative electrical potential compared to the exterior, so that positive ions tend to be pulled into the cell.

o Thus the inward electrochemical driving force for Na+ is large, as it includes the driving force due to the concentration gradient and a driving force in the same direction to the voltage gradient.

o Therefore to maintain this balance we need a pump which pumps out Na+.

o This is achieved through the Na+-K+ pump.

o It couples the export of Na+ to the import of K+ and hydrolyzes ATP to do so.

o The Na+-K+ pump helps to maintain osmotic balance of pressure in a cell so it wont flood with H2O and burst.