• Alleles are either dominant or recessive, according to the Law of Dominance and Uniformity, and a living creature with one or more dominant alleles will demonstrate the effect of this allele.

• The Law of Segregation states that throughout the creation of the gamete, each gene’s alleles segregate from one another, allowing the gamete to contain just one allele for each gene.

• The law of independent assortment is linked to the law of segregation, which says that during gamete production, segregation of various genes encoding distinct characteristics happens separately.

During gamete formation, the usual diploid number of chromosomes is decreased by half during meiotic division, resulting in haploid gametes with just 23 chromosomes. There are 46 chromosomes in a typical human diploid cell. Half of the chromosomes in a typical human diploid cell are derived maternally, from the female gamete (the egg cell or ovum), while the other half are derived paternally, from the male gamete (the sperm) (the sperm cell). Female and male gametes fuse together during sexual reproduction to form a new creature known as a diploid zygote.

The Law of Independent Assortment describes how both parents’ genetic inheritance is random. During meiotic division, the two homologous chromosomes separate from one another, as stated in the Law of Segregation. As a result, both maternal and paternal gametes’ chromosomes are arranged separately; in other words, chromosomes present in one gamete do not always end up in the same source after division. As a consequence, one gamete may end up with all chromosomes from the maternal source, whereas another gamete may end up with chromosomes from both maternal and paternal origins.

Even while genes on the same chromosome or related genes are not randomly arranged, the crossing over that occurs during meiosis permits them to reorganise. The exchange of homologous chromosomal sections happens in both maternal and paternal chromosomes throughout this phase to guarantee the independent assortment of connected genes. As a result of the development of previously unknown gene mixes, various gene combinations produce a large amount of variation across individuals.

Because each gamete has 23 chromosomes and there are two gametes, the total number of potential combinations is 223, or 8,388,608. These many options provide for a lot of variation in progeny genes. The impact of gene variation on evolution and evolutionary processes is significant.

What is Law of Independent Assortment?

The process of random segregation and assortment of pairs of alleles during gamete creation leads to the generation of gametes with all conceivable combinations of alleles in equal quantities, according to one of the Mendelian Laws of Inheritance. In his study of garden peas, Gregor Mendel established the principles of heredity. He outlined numerous characteristics of heredity in his article detailing this study, which were codified as the Mendelian Laws after the rediscovery of Mendel’s work. The laws are Law of Segregation and the Law of Independent Assortment. The Law of Independent Assortment is manifested when two or more characteristics linked to distinct genes are inherited.

What does it mean to have an independent assortment?

The law of independent assortment states that the zygote inherits distinct characteristics from various alleles independently of one another. Where the random selection of one allele for one attribute is unrelated to the selection of another allele for a different trait in any way.

What is an independent assortment?

When does independent assortment happen during meiosis?

Why is it necessary to have an independent assortment?

Independent assortment, in addition to crossing over, is responsible for the generation of new genetic combinations in the organism. As a result, it adds to eukaryote genetic diversity.

You must first grasp the rules of segregation in order to define an independent assortment. Separate gamete cells acquire two different, independently arranged genes during meiosis, according to the law of segregation. The maternal and paternal DNA, on the other hand, are randomly separated, allowing for more gene variety.

During the random partition of maternal and paternal DNA sources, the law of independent assortment is evident. The gamete may get maternal genes, paternal genes, or a combination of both due to random assortment. The genetic distribution is based on the random alignment of these chromosomes during the early stages of meiosis.

Gregor Mandel experimented with pea plants in a number of ways. As a consequence, he was able to figure out how heredity’s units, which are now known as genes thanks to the discovery of DNA and genetic information, function.

When alleles from at least two genes are randomly arranged into gametes, this is known as independent assortment. As a result, one gamete’s allele has no bearing on the alleles acquired by other gametes. 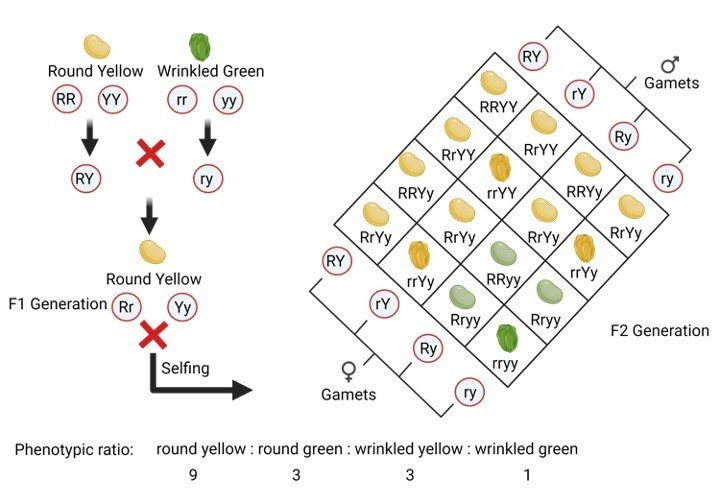 The four potential colour and shape combinations emerged in the ratio of 9:3:3:1, indicating that the genes for the two pairs of characteristics were randomly distributed into the gametes.

Independent events indicate that 3/4 x 3/4 = 9/16 will be both yellow and round if you have 3/4 yellow and 3/4 round. The proportions of the remaining three combinations may be determined in the same way.

After the discovery of chromosomes and their activity during meiosis, it was feasible to explain the autonomous assortment as a result of each pair of homologous chromosomes moving independently during meiosis. It’s crucial to have a diverse set of genes in order to create novel genetic combinations that promote genetic diversity within a population.

Mendel’s breeding of pea plants with diverse features, such as garden pea plants that produce wrinkled green peas and another garden pea plant that produces rounder yellow peas, led to the discovery of the law of independent assortment. Because yellow and round characteristics were more prevalent, all of the first generation’s progeny were yellow and rounded peas. After mating the first generation with each other, the second generation exhibited significant variance. In yellow and green peas, the experiment demonstrated the separate inheritance of homologous characteristics on distinct alleles, since the generated offspring were not just yellow and round or green and wrinkled like their parents.

What is an independent assortment?

Let’s say you’re tracking two features in a random population of cats: eye colour (brown or green) and hair colour (white or grey). Brown eyes (B) are the dominant allele for eye colour, whereas green eyes (G) are the recessive allele (b). Let’s assume the white fur (W) allele is dominant over the grey fur (G) allele when it comes to fur colour (w).

At sexual maturity, heterozygous cats with dominant features, such as brown eyes and white fur, will generate gametes. If we follow the law of segregation, the alleles for eye colour will be sorted separately from the alleles for fur colour during gamete formation.

After meiosis, the resultant gamete will include random alleles, resulting in offspring with mixed characteristics if two heterozygous cats are crossed. For example, one of the kittens may have brown eyes (BB or Bb) and grey hair (ww). Another kitten could have grey hair and green eyes (bb) (ww). Others may have brown eyes and white fur as well (thus, possible genotypes could be BBWW, BBWw, BbWW, BbWw).

This is simply a hypothetical scenario. The eye and fur colour characteristics are polygenic in nature, which means that multiple alleles are involved in determining the offspring’s phenotype. The activity of chromosomes during meiosis and the random movement of each homologous pair of chromosomes during meiosis are currently used to explain the independent assortment.

Independent assortment is a critical step in the creation of novel genetic combinations that add to the genetic diversity of sexually reproducing people.