The myocardium is the muscular layer of the heart. It consists of cardiac muscle cells (cardiac myocytes [also known as cardiac rhabdomyocytes] or cardiomyocytes) arranged in overlapping spiral patterns.

It is the heart’s muscular middle layer, wedged between the epicardium and the endocardium. It is sometimes referred to as the cardiac mass. Cardiac muscle cells (also known as heart muscle cells, cardiomyocytes, cardiac myocytes, or cardiac rahbdomyocytes) and fibroblasts make up the myocardium.

The heart is the human body’s primary circulatory organ, which pumps blood throughout the body. The heart is housed in the “pericardium,” a thin fibroelastic, double-layered, fluid-filled sac. The outer fibrous or parietal pericardium and the interior serous or visceral pericardium are the two layers of the pericardium.

The middle layer of the heart’s wall; the muscular material of the heart lying in the middle, i.e. between the epicardium and the endocardium (biology term). Mûs + karda are two Ancient Greek words that mean “muscle” and “heart,” respectively.

The heart’s walls are divided into three layers:

1. Epicardium: The epicardium is the heart’s outermost layer. Underneath the mesothelial cells lie connective and adipose tissues. The visceral layer of the serous pericardium is likewise made up of this layer. There are coronary arteries and veins, lymphatic vessels, and nerves beneath the epicardium.

2. Myocardium: This is the heart’s muscle layer, which is responsible for the heart’s pumping activity. It accounts for 95 percent of the mass of cardiomyocytes and is the thickest layer in the heart wall. The pressure present in each chamber determines the thickness of the myocardial layer. As a result, the issue arises as to which of the four chambers of the heart has the thickest myocardium. The atrium has a thin myocardial layer, whereas the ventricles, particularly the left ventricle, have the thickest myocardium.

3. Endocardium: This is the deepest layer of the heart that borders the inner wall as well as the heart valves. The endocardium is further split into two layers:

(a) an inner endothelial cell layer that borders the heart chamber.

The heart is a muscular organ in vertebrates that pumps blood to various areas of the body. It circulates blood by causing rhythmic contractions. The heart’s wall is made up of three layers: the epicardium (outermost), the myocardium (middle), and the endocardium (innermost) (innermost). 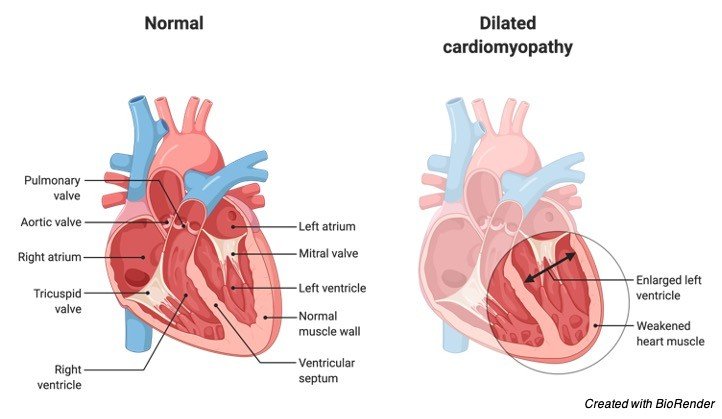 The cardiomyocytes are attached to the fibrous skeleton of the heart in a helical or overlapping spiral arrangement. This helical pattern produces a three-dimensional structural network that is complicated.

Cardiac muscle fibres are elongated cylindrical in form, with a length of 50–100 m and a width of 10–25 m. The muscle fibres are made up of discrete quadrangular cells with a clear oval nucleus in the centre. Muscle cells that are rectangular in shape are frequently branched and connected end to end to create a syncytium.

3. Adhering junctions, also known as fascia adherens, are linkages between actin filaments that allow contraction to be transmitted.

An intercalated disc is a structural term that refers to the double membranes created by closely linked cells and desmosomes joined by gap junctions. This is necessary for the transmission of electrical impulses from one cell to the next.

Gap junctions facilitate the electrical connection of muscle cells, allowing the heart muscles to pulse in unison. Cardiac muscle cells can create powerful, continuous, and rhythmic contractions on their own.

The autonomic nervous system and hormones, on the other hand, can affect the contractility of heart muscle cells. Intercalated discs appear as faint lines perpendicular to the long axis of the heart muscle fibres under a microscope.

Due to the high energy demand for regular contractions, cardiac muscle cells’ sarcoplasm (i.e., the cytoplasm of cardiac myocytes) is unusually abundant in mitochondria. The cardiac myocytes use oxidative phosphorylation to satisfy their energy needs. As a result, these muscles demand a constant supply of oxygen. Coronary arteries transport blood to the myocardium. Glycogen granules are also found in the myofibrils to support the increased energy demand.

The myocardial has the highest oxygen demand and is the most severely impacted by reduced blood flow. Ischemia, or a reduction in blood flow, can be dangerous for these muscles. Cardiovascular muscles are also resistant to exhaustion. Myogenic in nature, cardiac muscles generate their own action potential. However, some modified muscle cells are specialised to generate the stimulus for the heartbeat and convey the impulse to various parts of the myocardial system.

The Sinoatrial node, atrioventricular node, bundle of His, and Purkinje fibres are all specialised cells that make up the cardiac conduction system. Contractile cells make up 99 percent of the myocardium, whereas the myocardial conducting system makes up only 1% of the cells.

Cardiac muscles are primarily controlled by an independent neurological system that sends out timed nerve impulses to the heart cells, causing them to contract and relax in a regular manner.

The sarcoplasmic reticulum is stimulated by an action potential or nerve impulse, resulting in the release of calcium ions (Ca2+) into the cytoplasm. Troponin is induced to release tropomyosin by cytoplasmic Ca2+ ions. Tropomyosin that has been released changes its location, allowing myosin to bind to actin.

The stored ATP molecules are subsequently used by myosin to shorten each sarcomere. In the absence of the impulse, however, fast Ca2+ reabsorption into the sarcoplasmic reticulum occurs. Troponin re-anchors itself to tropomyosin in the absence of Ca2+, resulting in cardiac muscle cell relaxation. Twitch contractions occur in the heart muscle, with a protracted refractory time followed by short relaxation intervals. The heart has to relax in order to fill the atrium with blood for the next cycle to begin.

The force on the walls of the heart chamber is generated when all of the cardiac muscles act in unison. The cardiac muscle sheets are arranged in a planar pattern, with each muscle perpendicular to the others. When the heart contracts, it does so in numerous directions as a result of this. As a result of the contraction of the numerous layers of cardiac muscle fibre, the ventricle and atrium decrease from top to bottom and side to side. This causes the ventricles to pump and twist vigorously, pushing blood throughout the body.

Primary (genetic) and secondary (non-genetic) cardiac disorders are the two kinds of myocardial dysfunction (mostly acquired but may be precipitated for genetic reasons).

1. Dilated Cardiomyopathy: Ventricular dilation and congestive heart failure symptoms. Some of the primary contributing causes of this disease are arterial hypertension, myocarditis, alcohol misuse, or tachyarrhythmias.

3. Restrictive Cardiomyopathy: Scarring and stiffness of the ventricle walls, as well as impaired diastolic filling of the heart, are seen in this condition.

The heart tissues demand a large amount of oxygen and energy that is delivered continuously. The coronary arteries carry oxygen from the lungs to the heart. These arteries, on the other hand, are predisposed to the development of atheromas, which are aberrant deposits of fatty acids, cholesterol, and other cell detritus. If these atheromas are big, they impede or decrease blood and oxygen flow to the cardiac cells, resulting in a disease known as myocardial infarction or heart attack. 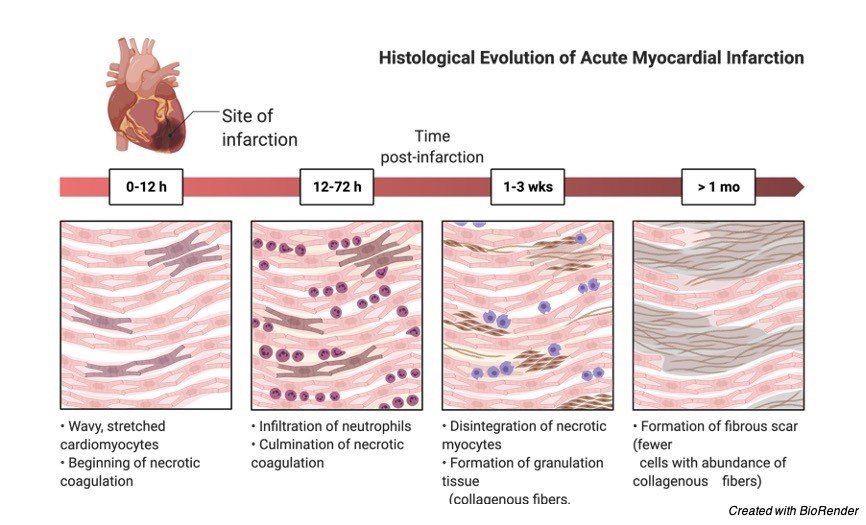 Myocardial ischemia is a condition in which the oxygen flow to the heart cells is reduced. The absence of oxygen causes heart tissue to die. However, the damaged region is healed as part of the human body’s natural physiological reaction. Though the mending causes fibrous tissue to grow at the location, this disrupts the usual propagation and conduction of excitatory impulses, resulting in aberrant cardiac contractions. These asynchronous contractions cause cardiac arrhythmias, or irregular heartbeats, such as ventricular fibrillation.

Cardiomyopathy is a heart muscle illness that lasts a long time.

1. Ischemic Cardiomyopathy: Diffuse coronary artery disease can cause prolonged heart ischemia, resulting in dilated cardiomyopathy. This can happen after one or more silent myocardial infarction events.

3. Peripartum Cardiomyopathy: Peripartum cardiomyopathy is defined as left ventricular systolic dysfunction occurring within one month after childbirth or five months after delivery.

4. Tachycardia-induced Cardiomyopathy: Tachycardia-induced cardiomyo-pathy is caused by a chronic and consistently high heart rate (> 110 beats per minute), as observed in prolonged ventricular tachycardia or atrial fibrillation. It can eventually lead to cardiac failure if it is not addressed.

If cardiomyopathy is not addressed, it might result in the following complications:

1. Heart Failure: Ineffective heart pumping leads to inadequate blood to satisfy your body’s demands, which can be fatal.

2. Blood Clots: Blood clots can form, and these clots can limit blood supply to organs such as the heart and brain, finally leading to stroke.

3. Valve Problems: Cardiomyopathy can cause the heart to expand, causing the heart valves to close incorrectly.

4. Cardiac Arrest and Rapid Death: Cardiomyopathy can cause cardiac arrhythmias, which can cause fainting or death.

Myocarditis is caused by inflammation of the myocardium. This might be due to a number of factors, including viral infection (infectious myocarditis), toxic chemicals, medication allergies, bacterial, fungal, or parasite infection, and an autoimmune disease. In myocarditis, both cardiomyocytes and cardiac vascular endothelial cells can be damaged and lost. The white blood cells infiltrate the heart muscle wall as a result of this.

Interstitial cardiac fibrosis, wall motion anomalies, arrhythmias, heart failure, myocardial infarctions, decreased ejection fraction, and sudden cardiac death can all occur as a result of this. Chest discomfort, dyspnea, and flu-like symptoms are common symptoms of myocarditis, although it can also be asymptomatic.

Heart failure or congestive heart failure, is a frequent end-stage route and symptom of cardiac dysfunction that can occur for a number of pathophysiological reasons. Heart failure occurs when the heart is unable to pump enough blood throughout the body, causing congestion, decreased organ perfusion, and functional impairment. Heart failure can be classified as acute or chronic, right heart vs. left heart, or systolic vs. diastolic, depending on the cause, location, and duration.

Each of these disorders has its own clinical manifestations and features. Myocardial injury or infarction, persistent hypertension, valve dysfunction, arrhythmias, cardiomyopathies, and other causes and risk factors can all lead to heart failure. Shortness of breath, extreme fatigue, and leg edema are all frequent signs of coronary heart failure. The use of medicines such as ACE inhibitors and beta-blockers, among other things, is crucial in the treatment of heart failure.

It is critical to do hs-cTn screening perioperatively to rule out the occurrence of this syndrome. The risk of 30-day death after noncardiac surgery has been demonstrated to be substantially increased by perioperative myocardial damage.

The heart is the body’s primary pumping organ. The pumping of blood throughout the body is caused by the contraction and relaxation of the heart. The cells and tissues of the body require a certain quantity of oxygen, which is provided by the circulating blood, for optimal functioning.

The myocardium, or cardiac muscles, are in charge of the heart’s rhythmic and continual contraction and relaxation, or pumping activity. Cardiac muscles are one of the first embryonic organs that form and operate throughout life. These muscles are part of a complicated system that includes coronary arteries, cardiac lymphatics, and autonomic nerves.

Cardiomyocytes make up the heart’s thickest layer. The myocardial is such a vital organ in the body that its malfunction can be fatal. Cardiovascular disease is the biggest cause of mortality in the globe. The myocardium is involved in a variety of cardiac disorders, resulting in contractile dysfunction, cell death, and ventricular pump failure.

[…] These plants are deciduous and uncommon among gymnosperms in that female plants generate seed cones rather than a clump of leaf-life structures (megasporophyll) with seeds. […]