The swallowing of extracellular fluids, i.e. the fluid surrounding the cell, as well as its contents of tiny dissolved molecules, is known as pinocytosis (solutes). The cell starts by creating small channels through its membrane that pinch off into vesicles and merge with endosomes, causing the contents to be hydrolyzed or broken down. Pinocytosis is translated as “cell drinking” from the Greek words “pino,” which means “to drink,” and “cyto,” which means “cell.”

Warren Lewis developed pinocytosis, also known as fluid-phase endocytosis, in 1931. Pinocytosis is a biological process in which a cell takes in fluid and its contents by creating small channels through its membrane that pinch off into vesicles and merge with lysosomes, which hydrolyze or break down the contents. from the Greek pino, meaning “to drink,” and cyto, meaning “cell.”

Phagocytosis and receptor-mediated endocytosis are two more kinds of endocytosis. All three are concerned with bringing material into the cell. Phagocytosis is the process of a smaller substance being “engulfed” by a bigger one. Pinocytosis, on the other contrary, defined as the act of drinking cells. 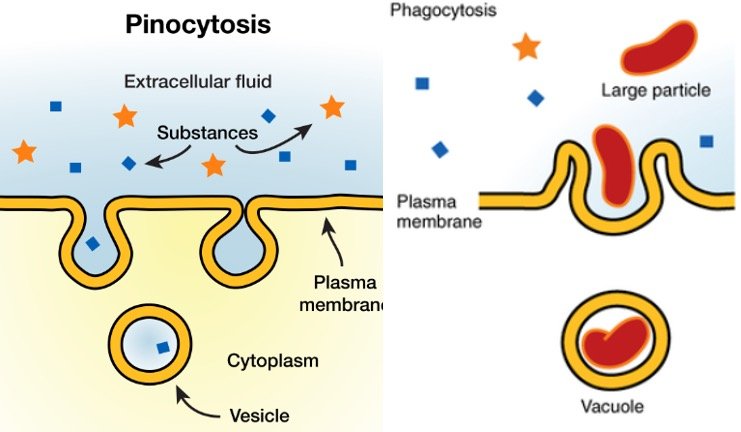 The distinction between pinocytosis and receptor-mediated endocytosis is that the latter is more selective; to begin endocytosis, chemicals must attach to receptors on the cell surface. Nonetheless, some sources describe the latter as pinocytosis, which is a much larger term.

Pinocytosis is defined as the absorption of fluid from outside the cell by pinosomes (fluid-filled vesicles), regardless of their size. As a result, we have included the receptor-mediated kinds under pinocytosis for the sake of being more comprehensive, as detailed in the following sections: Pinocytosis comes in a variety of forms.

Endocytosis is a cellular activity that utilises energy (ATP). As a result, it may be classified as active rather than passive transportation. Although a molecule including an ion can initiate pinocytosis, the developing vesicle is a collection of whatever else is in the extracellular fluid.

The semi-permeable membrane that surrounds the cell can be characterised as such. This implies it enables certain molecules to enter or exit by diffusion. Lipids, fats, and protein channels/carriers are also found in the cell membrane. Pinocytosis can only pick up tiny particles since they are generally dissolved in the extracellular fluid. This extracellular fluid, replete with its solutes, is contained in the resultant vesicle.

The vesicle is a membrane-bound organelle that consists of the cell’s extracellular membrane encapsulating the fluid in a spherical configuration. Electrostatic contact between a positively charged material, such as the charged part of a peptide or protein, and the negatively charged surface of the cell membrane can cause pinocytosis to occur.

This can cause binding to the cell membrane to occur, causing the membrane to change shape and form a pouch around the charged peptide or protein. The membrane eventually coils in on itself, and the pouch is ‘pinched off,’ enabling the vesicle to float into the cell’s cytoplasm.

The extracellular fluid is carried into the cell via the pinocytotic vesicles. Take a look at the stages involved in pinocytosis, which are depicted in the diagram below. 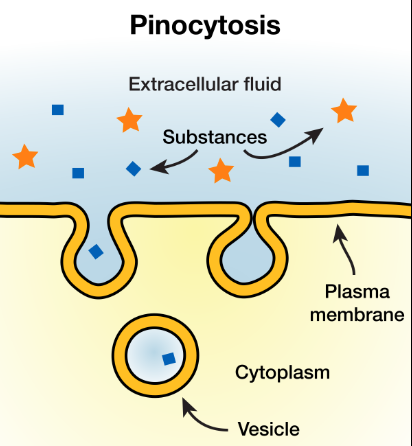 The following are the steps of pinocytosis, as seen in the diagram:

Step 1: The pinocytosis process begins when a molecule in the extracellular fluid attaches to the cell membrane.

Step 2: The cell membrane folds around the fluid containing the molecules to be eaten as a result of this.

Step 3: To form a pouch, the cell membrane invaginates (folds back on itself).

Step 4: The pouch is pinched off at the cell membrane and allowed to move into the cell’s cytoplasm.

Pinocytosis is primarily responsible for the absorption of extracellular fluids. It is involved in the absorption of nutrients, as well as the elimination of waste products and signal transmission. Types of Pinocytosis The size of the molecules to be taken up divides pinocytosis.

Immune cells such as macrophages employ macropinocytosis to sample bulk extracellular fluid for soluble antigens that can elicit an immune response if necessary. Based on the method of action, pinocytosis may be classified into four sub-types. The following are some of them:

4. Endocytosis that is not dependent on clathrin and does not require caveolae.

You may also like to read: Mature mRNA: Definition, Features, and Functions

Many membrane-bound and soluble substances, such as hormones, metabolites, and proteins, need this form of endocytosis. The following is a description of the procedure: Extracellular macromolecules can bind to receptors on the cell surface membrane. As a consequence, with the aid of adaptor molecules, clathrin begins to polymerize around the cell membrane.

The clathrin molecule is a three-legged structure, sometimes known as a clathrin triskelion. It consists of a vertex, a heavy chain, and a light chain divided by a ‘knee’, as well as a globular domain at the end of each leg. Adaptor proteins, also known as adaptins, establish a layer between the clathrin coating and the clathrin-coated surface.

Clathrin-coated vesicles are made up of three layers. The inner lipid membrane contains a variety of proteins, as well as an adaptor protein layer and a clathrin layer on the exterior. As a result, the adaptor proteins can interact with both the lipid and clathrin layers.

Clathrin and a huge protein complex known as adaptor protein 2 make up the coated pits that form the vesicles (AP-2). The macromolecules, as well as the bound matching receptors, are contained in these vesicles. When a clathrin-coated pouch develops, the cytosolic protein dynamin polymerizes over the pouch’s end, sealing it shut.

This makes advantage of the energy released by GTP hydrolysis. After then, the clathrin-coated vesicle can merge with an early endosome. The molecule detaches from the cell receptor when the early endosome gets more acidic, allowing the cell to utilise it.

The cell receptor remains inside the endosome and is either carried back to the cell membrane or moved to late endosomes, where it is degraded by lysosomes.

Clathrin-mediated endocytosis is the most researched kind of endocytosis, with approximately 50 proteins known to be involved in clathrin-coated vesicles production.

Adipocytes (fat cells) and endothelial cells are also affected by this form of pinocytosis. The caveolae complex, discovered in the 1950s, is made up of lipids, sphingolipids, and caveolins and cavins proteins. CAV-1, CAV-2, and CAV-3 are the three kinds of caveolae proteins.

They are frequently described as flask- or “cave”-shaped, but their form varies depending on the cell’s function. Around 150 CAV-1 molecules and 50 cavin molecules are found in each caveolae molecule. Caveolae are normally stationary in the plasma membrane, but they can bud out from the plasma membrane if a receptor is triggered (see figure below).

Caveolae can produce vesicles when they separate from the plasma membrane. Some bud off the plasma membrane only to fuse back with it, while others migrate to the early endosome and then back to the plasma membrane, according to studies. The primary protein involved in closing off the neck by interacting with CAV-1 is the enzyme dynamin.

Caveolae are considered to be involved in albumin trafficking through the cell membrane. Simian Virus 40, for example, has been identified to employ caveolae-mediated pinocytosis to enter cells and bypass the endosome-lysosome route (SV40).

Pinocytosis works without the use of receptors or other external stimuli. The formation of vesicles does not need covering proteins. Actin and other similar proteins are required for vesicle production in this pathway. Cargo can be supplied to early endosomes and then transported to the lysosome through the late endosome route. It can also be recycled by being delivered to the Golgi network or returning to the plasma membrane.

Pinocytosis is widely employed in eukaryotic cells, from the transfer of dissolved lipids (e.g. LDL) and vitamins through the elimination of waste products via kidney cells. It is utilised by immune system cells to screen for antigens in extracellular fluid (toxins or foreign substances). It may also be seen in the digestive system’s microvilli. Intriguingly, flu viruses and certain bacterial toxins can both employ pinocytosis to gain entrance into cells.

Pinocytosis may happen anywhere. Pinocytosis, on the other hand, is seen in nearly all cell types. Rather than liquids that have already been dissolved, phagocytosis takes up bigger solid objects to be broken down, such as bacteria. In contrast to the 0.1–0.2 m particles taken up by pinosomes in pinocytosis, phagocytosis generates phagosomes that swallow 1-2 m particles.

Furthermore, unlike pinocytosis, phagocytosis is a triggered process rather than a continuous activity. Finally, before the phagosome is produced, phagocytosis necessitates the development of pseudopodium (cell surface protrusions).

All About Pinocytosis and Cell Drinking: https://www.thoughtco.com/pinocytosis-definition-4143229