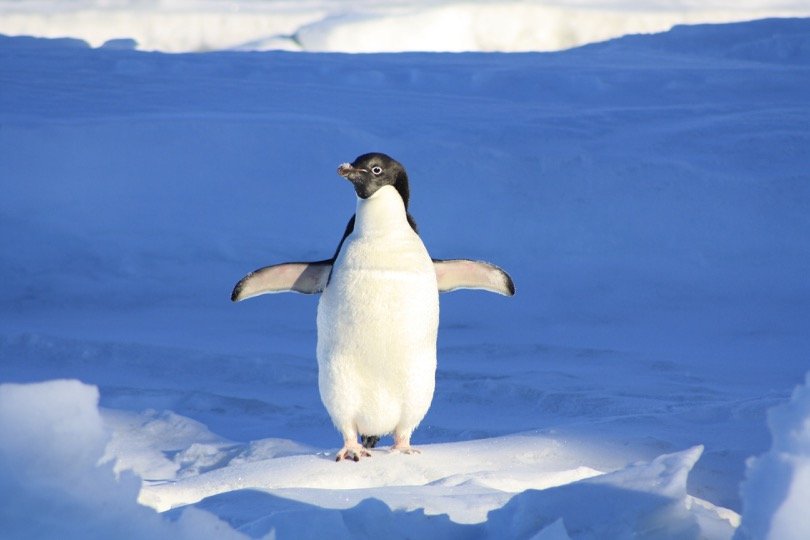 Appearance of the Adelie Penguin

A blue-black back and a fully white chest and belly distinguish the Adelie Penguin from the other Penguin species, making it one of the most easily recognised.

The Adelie Penguin’s head and beak are both black, with a distinguishing white ring around each eye. Its feet and legs are also black.

The Adelie Penguin’s powerful, pink feet are tough and bumpy, with nails that not only assist the Adelie Penguin in climbing the rocky cliffs to reach its nesting sites, but also assist them in pushing themselves along as they are sliding (rowing) down the ice as they migrate northward.

When swimming in frigid water, Adelie Penguins utilise their webbed feet, as well as their little flippers, to propel themselves forward and keep their balance.

During the winter months, Adelie Penguins travel northward, where they live on enormous platforms of ice and have better access to food than they do south. When it’s warm enough outside in the summer, Adelie Penguins head south, where they forage for ice-free terrain on rocky slopes where they can make their eggs.

A colony of more than half a million Adelie Penguins has established itself on Ross Island, which was produced by the eruptions of four gigantic volcanoes in the Ross Sea. The colony is one of the world’s largest animal colonies.

Behaviour and Life Style of the Adelie Penguin

All penguin species, including the Adelie, are very social animals, and they congregate in big groups known as colonies, which can contain thousands of penguin individuals at a time.

Although Adelie Penguins are not known to be very territorial, it is not uncommon for adults to get hostile over nesting locations, and it has even been reported that they have stolen rocks from the nests of their neighbours in order to protect their own.

Aside from hunting in groups, Adelie Penguins are also known to congregate in order to lessen the likelihood of being eaten by hungry predators. Adelie Penguins are continuously engaging with one another, and it is believed that body language and specialised eye movements are the most common means of communication among the species’ members. 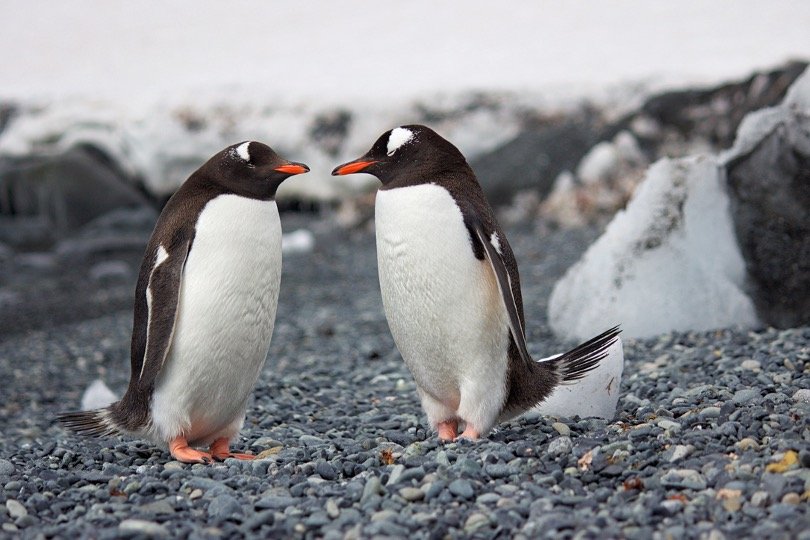 Reproduction and Life Cycles of the Adelie Penguin

Adelie Penguins return to their nesting sites during the Antarctic summer months of November and December, when the temperatures are warm enough for them.

While they fast during this period, the Penguin’s soft feet are well-suited for walking on land, making its journey to its nesting place that much more comfortable. Adelie Penguin pairings mate for life in vast colonies, with females laying two eggs a couple of days apart into a nest made of rocks.

Adelie Penguins are the only penguin species that reproduces by breeding. Both the male and female take turns incubating their eggs while the other goes off to feed, which can last for up to 10 days at a time for each individual.

They have an egg-tooth, which is a protrusion on the top of their beaks that assists them in breaking out of the egg when they are young. Once the eggs have been laid, the parents continue to take turns looking for their young while the other goes off to forage for food.

They begin to assemble in groups called crèches after about a month and are able to survive on their own at sea when they are between 2 and 3 months old.

Diet and Prey of the Adelie Penguin

Despite the fact that Adelie Penguins are good swimmers, they rely on the sea to provide them with all of their food. Besides krill, which may be found in abundance across the Antarctic seas, these penguins also eat Mollusks, Squid, and other tiny fish to supplement their diet.

The record of fossilised eggshell accumulated in Adelie Penguin colonies over the last 38,000 years demonstrates a dramatic shift away from a fish-based diet to a Krill-based diet that began two hundred years ago and has continued to this day.

The decline of the Antarctic Fur Seal in the late 1700s and the decline of the Baleen Whale in the twentieth century are regarded to be the causes of this. Because of the reduction in competition from these predators, there is an abundance of Krill, which the Adelie Penguins may now take advantage of as a more convenient source of food.

Predators and Threats to the Adelie Penguin

As a result of the harsh environment in which they live, adult Adelie Penguins are not preyed upon by land-based predators. When it comes to aquatic life, the Leopard Seal is the greatest serious threat to the Adelie Penguin.

The Leopard Seal is one of the world’s southernmost species of seal and a dominating predator in the Southern Ocean. They have learned to escape these predators by swimming in big groups and not walking on thin ice, which they have learned to do by experience.

In addition to the Killer Whale, the Adelie Penguin has a number of other predators, albeit these are typically larger species of penguin found further north. S. Polar Skuas have been observed preying on the eggs of Adelie penguins that have been left unattended, as well as on chicks that have wandered from their mother’s group.

Adelie Penguins live in one of the coldest locations on the planet, and as a result, they have a thick layer of fat under their skin, which helps to keep them warm during the winter. Their feathers serve to keep them warm in the winter and provide a waterproof coating for added protection in the summer.

The Adelie Penguin is a highly effective hunter who may devour up to 2kg of food per day, with a breeding colony consuming around 9,000 tonnes of food in a single 24-hour period, according to some estimates.

The Adelie Penguin’s flippers enable it to swim quite well, and it has been known to dive to depths of 175 metres in search of food. In contrast to other penguins, Adelie Penguins do not have teeth in the traditional sense, but instead have tooth-shaped barbs on the tongue and on the roof of their mouth.

They are not used for chewing, but rather to aid the Penguin in swallowing slippery prey that is difficult to swallow.

Conservation Status of the Adelie Penguin

Adelie Penguins, despite the fact that they are restricted to coastal Antarctica, are one of the most abundant and widespread penguins in the southern hemisphere, according to the World Wildlife Fund.

The Adelie Penguin has adapted successfully to its frigid environment, as evidenced by the fact that more than 2.5 million breeding pairs have been discovered throughout southern Antarctica.

Observing that Adelie Penguins are able to nest on beaches that were previously ice-covered, scientists have speculated that the species’ breeding behaviors may be a sign of climate change. In the United States, the Adelie Penguin is considered to be of least concern.