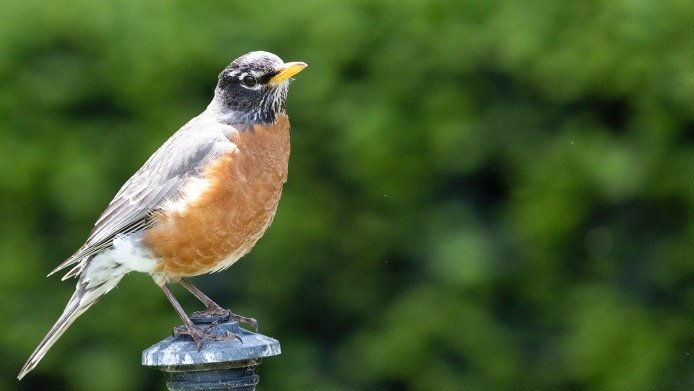 The American robin is a species of songbird that belongs to the thrush family. Thrushes are often referred to as “heralds of spring” because of their appearance in the springtime. Robins in the United States have a healthy interaction with humans.

They are a friendly species that can aid in the management of pest populations. They also contribute to the health of the ecosystem by distributing seeds from the fruit that they consume.

Amazing Facts About the American Robin!

• Wisconsin, Michigan, and Connecticut have designated the American robin as their official state bird.

• During their natural lives, they have an average longevity of roughly two years. One individual, on the other hand, survived to be nearly 14 years old!

• American robins congregate in groups ranging in size from 20 to 200 individuals.

• Cowbirds often lay their eggs in the nests of American robins, yet the robins repeatedly reject the eggs they lay.

American robins can be found in the United States, Canada, and Mexico, all of which are located on the continent of North America. A moderate climate supports their existence, which includes habitats such as woodland and shrubland, as well as open land areas.

They are also regularly found in residential areas, where they make their homes. When they aren’t roosting or nesting on trees, you can find them searching for food in the grasses around their territory.

You can find them on lawns and gardens, in farm fields, in city parks, and in wooded parts of the countryside.

The ideal time of year to see this bird is highly dependent on where you are in the world. Because they migrate, they can be found in a variety of habitats depending on the time of year. They are, nevertheless, active throughout the year.

Females construct their nests entirely on their own, with no assistance from their partners. For the outside of the nest, she gathers twigs, grass, feathers, and paper, which she uses to construct the building. She fills the nest with mud to keep it from falling apart.

Soft materials, such as grass and other plant stuff, are used to cushion the interior of the boat. When completed, the nesting structure will measure around three to six inches in height and six to eight inches in width.

The nest can be found in a fork on a tree branch or in a dense bush, depending on the species. It is often located at a large height above the ground, ranging between 4.9 and 14.8 feet in elevation.

Turdus migratorius is the scientific name given to the American robin. It belongs to the Turdidae family of thrushes and the Aves class of birds. Aves is a group of birds that includes a variety of species.

The English robin, properly known as the European robin, is the source of the name “American robin” in the United States. Early immigrants remarked that it resembled the European robin in appearance, particularly in the appearance of its red-orange breast, and so named it.

But this appears to be the only thing that the two birds have in common when compared side by side. These two species are not closely related to one another. Despite the fact that they are members of the same order and class, they are members of separate families.

The English robin is a species of bird native to Europe that is a member of the Muscicapidae family, which is also known as Old World Flycatchers. Turdidae is the family of birds that includes the American robin, which is in fact a species of thrush. Because the anatomy of American robins is different from that of their European counterparts, they are also larger.

American robins range in size from eight to eleven inches in length and weigh between 75 and 77 grammes. They have a wing span ranging from 12 to 16 inches in length. The thrush’s anatomy is very similar to that of a thrush.

Feathers, wings, and a beak are among the anatomical traits of this species. The beak is yellow, and the throat is striped with black and white lines in the middle. The front of the head is black, and the back is grey or black in color. The color of the chest is a vibrant orange.

Males are often slightly larger than females, and their features are more vibrantly colored. These birds have a strong sense of community. They prefer to reside in tiny groups during the day and congregate in bigger groups at night.

Because they are diurnal, they are at their most active during the day. They are singing a beautiful tune. It is frequently one of the first bird songs that you hear in the morning as you wake up.

The Migration Pattern and Timing of the American Robin

These birds are migratory in their whole. During the day, they travel in large groups. During the winter, they migrate southward. They migrate northward in the spring. In the fall, their migration is dictated by the availability of a sufficient food supply in the area.

The American robin is an omnivore, which means it eats anything. It eats both plants and animals, and it is a vegetarian. It will browse on the ground throughout the day and will also forage at night, according to the species. Fruits and berries account for around 60% of their total caloric intake, and these foods are particularly vital during the winter months.

What Does an American Robin Eat?

Beyond fruits and berries, an American robin’s diet is diverse and includes a variety of invertebrates such as earthworms, caterpillars, grasshoppers, beetle grub worms, spider grubs, spider webs, snails, and other small animals.

Because American robins spend a significant amount of time in residential backyards, they are occasionally poisoned by pesticides applied by humans and murdered by domestic cats, both of which are harmful to the birds.

In addition, they are preyed upon by a variety of wild creatures. The American robin’s conservation status on the International Union for Conservation of Nature Red List is of the least concern.

The species is in a stable state. In the past, poaching was a significant issue. They were persecuted for many years before being protected by the Migratory Bird Act of the United States.

What Eats the American Robin?

Aside from domestic cats, robins in the United States are preyed upon by birds of prey and snakes. Hawks, eagles, snowy owls, and northern pygmy owls are some of the birds that prey on American robins, as well as other species.

Rat snakes and gopher snakes are two species of snakes that prey on them on a regular basis. Because of their susceptibility, American robin eggs and young are preyed upon by extra predators. Raccoons, squirrels, foxes, crows, common ravens, and blue jays are just a few of the species that often prey on eggs and chicks.

The breeding season for American robins takes place between April and July, depending on the location. The process of reproduction is called viviparous reproduction. The male’s wooing activity is intended to entice a female to become his partner.

He tries to attract her attention by swaying his wings, spreading his tail, and singing. It is common for the female to lay between three and five light blue eggs. Incubation time ranges between 12 and 14 days for the eggs to hatch.

When the chicks hatch, they are altricial, meaning they have no taste. This means that they are unable to care for themselves and must rely on their parents for care and food. The chicks leave the nest and begin to fly about 13 days after hatching, when they are known as fledging.

It usually takes them two weeks to become proficient at flying and to be able to maintain flight for an extended period of time. A moult occurs once a year and they have an average lifespan of two years.

The population trend is upward, and there is no immediate threat to their extinction in the near future. The state of their conservation is of the utmost importance.