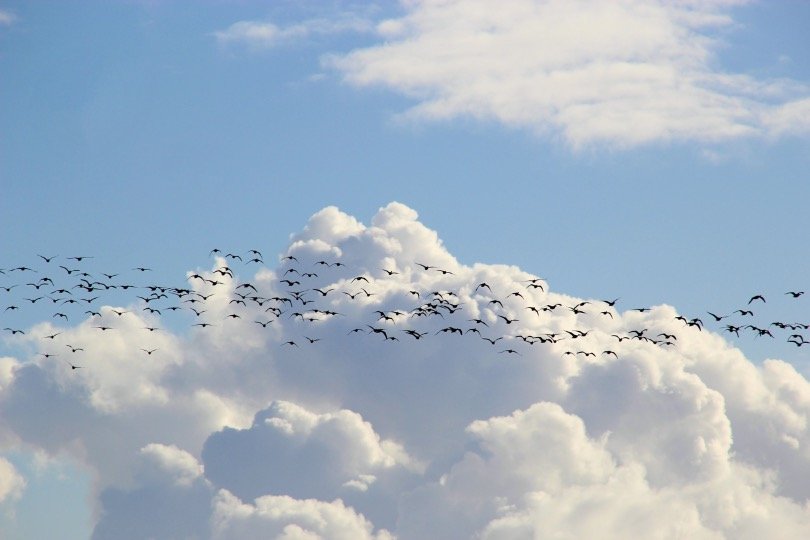 Why Do Birds Migrate?

Traveling hundreds or even thousands of kilometres between breeding and non-breeding regions for a bird is a tough and risky voyage that not all birds survive. So, what causes birds to migrate? What drives millions of birds into the perilous skies every spring and fall?

There are several reasons for various birds to migrate, but it all boils down to survival, not just for the individual bird, but also for the family they want to produce.

What If No Birds Migrated?

Birds would have far more difficult lives if they didn’t have to make these perilous travels. If no birds travelled, food supplies in their ranges would be exhausted quickly during the breeding season, causing many chicks and adults to starve.

Predators would be drawn to the huge densities of breeding birds and easy feasts of fragile nestlings, and competition for nesting locations would be strong. Many birds migrate for two reasons: food and breeding, but these motives are actually more complex than they appear.

Migrating for a Meal

Food shortage is one of the primary driving causes for migration in all birds. Food would become short if all birds stayed in the same wealthy, tropical places all year, and mating would have been less productive with malnourished parents and starved hatchlings.

However, each spring, as food supplies recover in northern locations, millions of birds fly to those places to take benefit of the abundance. As food sources wane in the fall, birds return to tropical areas that have refilled in the interim.

This pattern of travelling for a meal applies not just to neotropical migrants, but also to short-distance migratory birds that may travel only a short distance to follow a seasonal food supply. Bird irruptions are also caused by changes in food supply, with bigger irruptions happening when food resources for northern birds are limited.

Because of the scarcity, they are forced to seek suitable food deeper south, even outside their normal range. When hunger looms, even birds that do not normally migrate might find themselves on the move.

Birds have developed varied migration routes, timing, and destinations over millennia in order to disperse over the world to reproduce. This allows birds to raise their young in a range of acceptable environments, improving the likelihood of healthy, viable offspring.

The ideal breeding circumstances differ for each bird species and may be influenced by a variety of variables. Specific food supplies, suitable shelter settings, and breeding colonies that give more security than a single pair of bird parents are all crucial for breeding dispersal.

Arguing that birds migrate to help their chicks survive may appear contradictory. Many of those bird parents forsake their young as they develop, allowing the immature, untrained birds to navigate their perilous first journey without adult supervision.

However, it is precisely because the birds nurtured their chicks in a reasonably wealthy, secure environment that young birds had the benefit of being prepared to undertake that voyage.

Although food is important for regular migration, birds migrate for a variety of reasons connected to ensuring the survival of their progeny, including:

• Climate: Different forms of plumage have developed in birds to help them live in different climates, and alterations in those climates can have an impact on migration. Numerous birds, for example, abandon their Arctic nesting sites as temperatures begin to fall and they require more temperate habitat since they cannot tolerate the bitter cold. Likewise, the warmest tropical locations can be a hard environment for growing delicate chicks, thus laying eggs further north in milder places is preferable.

• Predators: Habitats with ample food supplies all year attract a higher number of predators that might endanger nests. Birds that move to other environments avoid the assault of predators, giving their young a greater chance of maturation. Many birds further migrate to specialized environments that are almost impenetrable to predators, including such steep coastal cliffs as well as rocky offshore islands.

• Disease: Any big group of birds jammed into one sort of environment is vulnerable to parasites and illnesses that can wipe out thousands of birds in a short amount of time, and illnesses can and often do rarely ruin breeding colonies. Birds that disperse to diverse areas, on the other hand, have a lower risk of transmitting a disease to their whole population, especially their young.

In the conclusion, the factors why birds migrate are all about survival: not only the survival of the migratory birds, as well as the survival of the young they will rear. Finding more nutritious food sources, exploring safer habitats, and avoiding predators are among migratory activities aimed to increase breeding success.

Good migration permits birds to live for another generation while also providing birders with the opportunity to see another year’s migration.