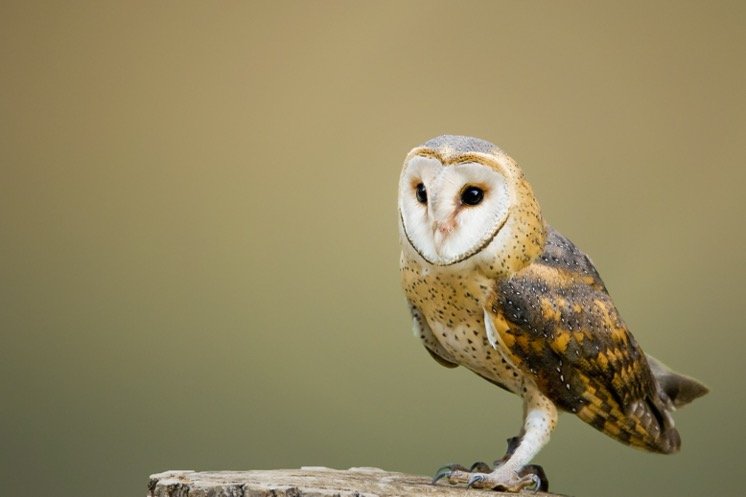 In North America, barn owls are the most well-known members of the owl family, distinguished by their stark white faces and eerie sounds. They are exceedingly common, making them one of the most widely distributed bird species on the planet.

Because they hunt mostly on rats and mice, barn owls help to keep the rodent population under control wherever they inhabit. Their appearance is associated with death in many cultures, although they also represent the afterlife in others.

• These owls are most commonly found in graveyards in England. As a result, they have earned the reputation of being a portent of death.

• Animals such as barn owls are nocturnal predators that devour their prey whole and regurgitate the undigested pieces as pellets.

• With their particular facial features, they are able to detect low-frequency sounds made by their prey.

• Female owls weigh approximately 10% more than male owls, and they are monogamous throughout their lives.

• Captive owls can survive for up to 20 years in captivity.

However, the genus Strix was finally restricted to wood owls of the other main owl family, the Strigidae, and the genus strix was dropped. Because these owls are so common, there are more than 25 subspecies that differ in size and coloring from one another.

Appearance of the Barn Owl

Known for its dazzling white, heart-shaped face, the barn owl is a species of owl that lives in the United States. Unlike many other owl species, they have smooth skulls and no ear tufts, which distinguishes them from the majority of others.

The owl’s eyes are huge and dark, just like its body. Their heart-shaped faces, as well as the backsides of their wings and the undersides of their bodies, are framed by brown and grey feathers. The wings are small and rounded, and they are whitish on the underside.

Occasionally, their light white breasts will be spotted. Male owls prefer female owls with spots because they are more attractive to them. These owls weigh between 400 and 600 grammes, with the largest barn owl reaching 700 grammes, or nearly 1.5 pounds, on the scale.

Males have a tendency to be lighter in weight and smaller in stature than their female counterparts. These birds can range in size from 32 to 40 centimetres in length (about 12.5 to 15 inches). Their wingspan ranges between 100 to 125 centimetres (39 to 49 inches).

Behavior of the Barn Owl

These owls are nocturnal birds that spend the majority of their time hunting at night. Their face discs aid in the transmission of sound to their ear-holes, which allows them to better notice sounds. After swallowing their meal in its entirety, these owls regurgitate pellets that have been digested by the rest of the animal.

Depending on their size, these pellets can be up to 1.5 inches in diameter, and scientists utilize them to learn a great deal about what the barn owl consumes. Their eyes are twice as sensitive as the human eye, making them ideal for night vision.

This characteristic, combined with their huge wingspan in comparison to their bodies, allows them to hunt silently at night. They prefer to hunt in broad fields rather than dense forests. The sounds that these owls emit have been compared to those of banshees.

One of the most distinguishing characteristics of the barn owl is its eerie screeches, which are unique from the hoots made by most other owls. Because they sleep in abandoned barns, these owls have earned the nickname “barn owl.” It is also preferable for them to nest in vacant tree cavities and other hollow areas.

A large number of subspecies of these owls can be found in a variety of habitats all over the world. They are a very adaptable species that can survive in a wide range of settings, from desert to rich farmland and all in between.

The fact that these owls prefer to nest in old barns and other abandoned structures means that they are at ease living in cities, suburbs, and other settings where they come into close contact with humans.

Diet of the Barn Owl

These owls are predatory birds of prey, and they hunt mostly on rats and mice. Scientists have discovered the occasional frog, smaller bird species, or even a fish by studying pellets in the past. Some of these owl species are able to survive only on bug prey.

These owls are a tiny, island-dwelling species that can be found only on islands. Because substantial food sources are uncommon in the areas where these owl subspecies inhabit, they have developed adaptations to their habitat.

Predators and Threats to the Barn Owl

Baby barn owls and barn owl eggs are preyed upon by opossums, eagles, and raccoons. The barn owl’s cousins are also preyed upon by other owl species, such as the great horned owl and the eagle owl, among others.

In terms of population decrease, these owls are classified as a Least Concern species. Their populations have remained stable throughout the world, however restoration programmes are in place in places where barn owls are in danger of extinction.

The mid-flight display of male owls is used to signal to females that the male is ready to mate. This includes “moth flying,” which is a move in which male owls hover in midair in front of a female owl as the female watches them.

It is possible for these owls to lay up to two nests per year and to breed all year. Almost all barn owls mate for life, and around 75% of all barn owls remain in the same territory after mating. In the event that they are unable to produce enough young owlets together, they will “divorce.”

When barn owls are preparing to lay eggs, they prefer trees that are closer to the large, open fields where they like to hunt. Females deposit anywhere from 2 to 12 eggs, which are laid over a period of several days by the same female.

This spacing is necessary in order to prevent the owlets from hatching all at once. If there is plenty of food available, the female will produce more eggs. Each egg takes approximately 30 days to incubate. Chicks are ready to leave the nest after around 15 weeks of care from their mothers and father.

As a result of their extensive distribution, it is difficult to obtain an accurate estimate of their number. Barn owls are estimated to number between 4 million and 10 million throughout the world, according to recent counts conducted by the United Nations Environment Programme.

According to the International Union for Conservation of Nature’s Red List, this species is considered to be of Least Concern. The greatest serious hazard to these owls is habitat loss, however their populations have remained quite steady for the most part.

The most important thing you can do to safeguard barn owls is to provide them with safe locations to raise their young, such as nesting boxes.

Barn Owl in the Zoo

This species of owl has found a home in a number of zoos around the United States. One of these owls is on display at the Cincinnati Zoo in Ohio as part of their Wings of the World exhibit. The Cosley Zoo in Indiana, the Pittsburgh Zoo in Pennsylvania, and the San Francisco Zoo in California are just a few examples of the many other zoos throughout the world.

There is a good chance that a barn owl can be found at a zoo or wildlife centre near you, no matter where you are. There are approximately 970 of these owls living in zoos around the world. Many of these owls have been rescued and have found new homes in zoos as a consequence of these efforts.

After being rescued, Dawn and Dusk, the resident owls at the Belfast Zoo, were able to find permanent homes in their new surroundings.

Another barn owl, Bubo-no-no, was saved as a chick by the Hawaiian Electric Company and was able to find a permanent home at the Honolulu Zoo after being raised there. Zoos are frequently essential in the raising and rehabilitation of owls that would otherwise be unable to survive in the wild.