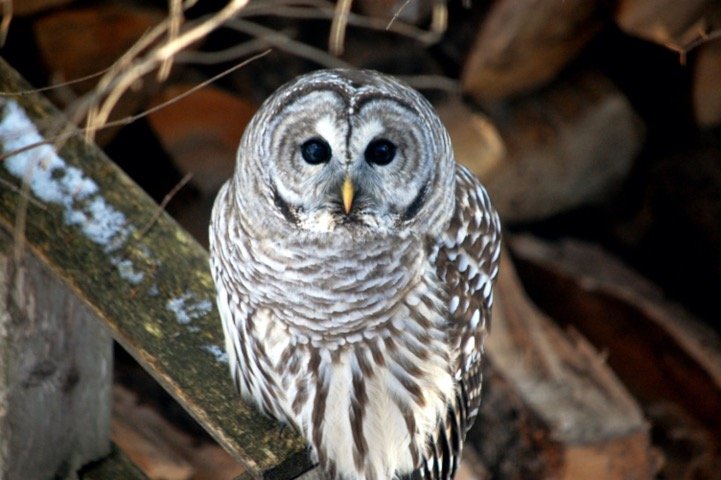 The barred owl is well-known for its wide variety of vocalizations as well as for its exceptional hunting abilities and versatility. It uses the pinpoint accuracy of its massive eyes and asymmetrical ears to locate even the tiniest of animals on the forest floor, which it can do with ease. Despite this, these birds of prey appear to be intrigued by humans. Some people find them to be practically tame.

Amazing Facts About the Barred Owl

The flight of the barred owl is almost completely silent. This is due to the fact that each feather is particularly soft, and each major feather has a comb-like edge that helps to reduce the sound of the bird when it is in flight, as explained above.

Barred owls have an impressive range of calls and hoots that include screams, cackles, hisses, rasps, and what sounds like sinister laughing among other things. The male voice is deeper in pitch than the female voice.

The barred owl is a large owl, but the great horned owl is considerably larger and will prey on adults as well as small children.

The owl’s ears are positioned at various heights on its skull. Using this information, they can locate the position of prey. On top of that, the feathers that surround the face disc act as a sound funnel, directing sound into the ears.

The barred owl can be found in woodlands throughout the eastern United States and southeastern Canada, with populations also found in the Pacific Northwest. On the west coast of Mexico, there is also a population of this species.

It can be difficult to locate despite the fact that it is a huge bird, especially during the winter in deciduous forests when its coloring helps it to blend in with branches of trees. Barren owls, on the other hand, are becoming increasingly common in suburban areas.

This could be due to an increase in the number of rodents, such as rats, mice, and squirrels, as well as smaller birds such as wrens and house sparrows, as well as trees that have grown large and sturdy enough to accommodate the bird’s nesting needs.

As a result, a suburban homeowner shouldn’t be astonished if a barred owl appears directly in front of their home. Barred owls, on the other hand, are known to be interested about humans and their surroundings. Despite the terrifying sounds they can create, they are generally calm and non-aggressive.

When hunting for one in the woods during the day, look up into the trees at spots where a branch that is at least 16 feet high and near to the trunk can be found close to the ground. The owl also spends a significant portion of its day in tree hollows.

Nests of the Barred Owl

As a huge bird, the barred owl necessitates a great amount of space for its nest, which it prefers to build in cavities in large, ancient trees, particularly elms and beeches. However, if there are no cavities or a nest box available, they will make use of the nests of squirrels or other birds.

They do not build nests in the manner of other birds, although they may clean up the floor of the region before the female sets her eggs there.

The scientific name for the barred owl is Strix varia, which means “variable owl.” The name is derived from the Latin name of an owl monster vampire who feeds on the blood of newborn newborns. Varia is most likely a reference to the owl’s striped and variegated plumage.

How Do Birds Communicate With Each Other? 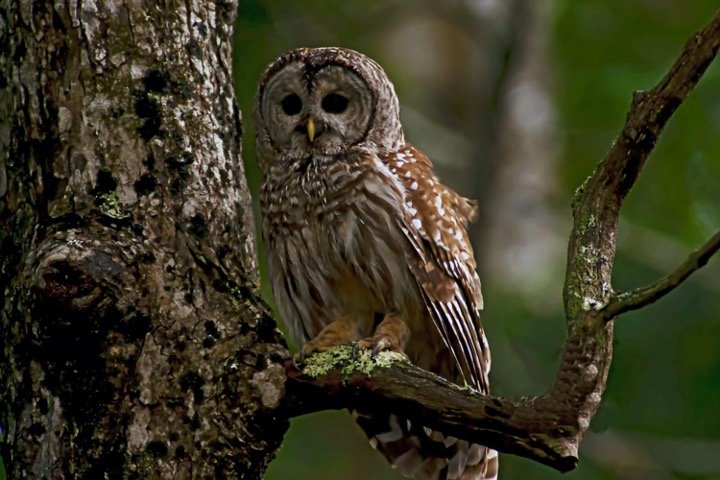 Appearance of the Barred Owl

Unlike its adversary, the great horned owl, the barred owl is spherical in shape and does not have tufts of hair on the sides of its ears. Its breasts are horizontally striped in brownish-gray, and its tummy is vertically striped in the same colors as the stripes on its breasts and belly.

The owl’s back, wings, and tail are all decorated with a pattern of white and brownish-gray bars. Because of its enormous head, its eyes, like those of most owls, are abnormally huge in comparison to the size of its body.

One feature that distinguishes the owl’s eyes from the rest of its body is that they are black, which is unusual for owls living in eastern North America. The barn owl is the only other eastern owl that has black eyes in addition to the eagle.

Behavior of the Barred Owl

These owls are usually active at night, though they have been observed hunting during the day on occasion. Until the fledglings are old enough to be on their own, it lives in solitary with its mate and young children.

Despite the fact that they are monogamous and will remain together for the rest of their lives, the couple only gets together to reproduce. During the rest of the year, each partner has his or her own personal shooting range.

The owls are territorial, and their home territories range in size from 675 to 3049 acres, however the size of their breeding territories is slightly smaller. It is rare for barred owls to migrate unless food and shelter are in short supply, and some owl territories have been in the possession of the same family for centuries.

Almost any prey that it can subdue and swallow is included in the diet of this owl. The owl pounces on terrestrial prey such as voles, but it is also capable of catching bats in mid-air as they are flying.

It will also raid nests and walk into shallow water in search of fish and crayfish, among other things. The owl has also been observed preying on roadkill in the past. At the end of the process, it excretes a pellet that contains fur, teeth, and anything else that its digestive tract was unable to digest.

Though the owl prefers to consume its food whole, if the creature is too huge, it will eat the head and save the remainder for later.

Despite the fact that a nest box might be beneficial, humans should avoid feeding wild owls because the owl will develop accustomed to being fed, which is hazardous to their health.

Predators and Threats to the Barred Owl

Despite being a highly effective predator in its own right, the barred owl is vulnerable to predation from a variety of sources. The great horned owl is its most significant adversary because it competes with the barred owl for territory.

Occasionally, creatures intended to be prey are able to effectively fight themselves and kill the owl. Diseases, particularly in the form of newborn owls, have a negative impact on owls. These diseases include West Nile Virus, avipoxivirus, malignancies and aspergillosis.

The parasites that cause toxoplasmosis and trichomoniasis also prey on barred owls, causing them to get ill. However, these owls can live for a decade or more in the wild despite this.

The world’s oldest barred owl lived in captivity for 34 years and one month, according to the records. The owl’s population is stable, and the species’ status on the IUCN Red List is classified as Least Concern.

Reproduction, Birth of Young, and Lifespan of the Barred Owl

They typically mate in late winter, after the male has courted the female with a display of his own body parts. After mating, the female returns to her nest, where she lays an egg every two or three days for the next two or three months.

During this period, the male takes care of her needs. Incubation occurs solely in the female while the male continues to feed her. The eggs are white, rough to the touch, and ovate in shape, and only the female incubates them.

The eggs hatch after around 28 days. These helpless newborns have white down that is replaced by feathers after two or three weeks, and they are helpless.

Following the hatching of the eggs, the female cares for the newborn owls, known as owlets, for three weeks. After that, she joins her mate in their search for the owlets.

Typically, newborn owls can begin to fly at six weeks of age and become self-sufficient by six months of age, depending on their size. When they reach the age of two, they have reached sexual maturity.

There are around 3 million owls in the world, and the population of these birds appears to be expanding as the owls expand their range. Some scientists believe this is due to the prevention of wildfires and the planting of trees, among other factors.