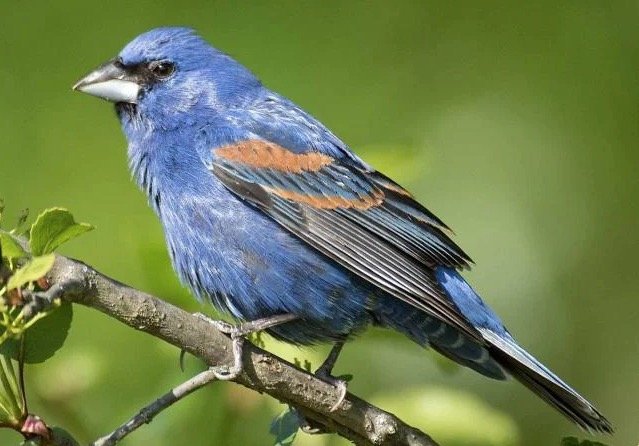 Despite the fact that the blue grosbeak may be difficult to locate in some regions, it can be found. A person may only hear its singing without seeing it, however the vividly blue male is a sight to behold.

It belongs to the group of birds known as grosbeaks, which are huge birds with hefty beaks that are employed for seed cracking. Grosbeaks are not considered a scientific group because they do not have a common ancestor and may only be distantly related to one another, as is the case with other bird species.

Fortunately, the blue grosbeak is not endangered, and its population and breeding area may perhaps be increasing as a result of recent population growth.

• The blue hue of this grosbeak, like that of all blue birds, is not a result of a pigment, but rather a result of the way light strikes its feathers.

• Males are the only ones who sing, and the songs of the older males are lengthier.

• A “gross” is a term used to refer to a group of grosbeaks.

• They will occasionally use a snakeskin that has been shed to construct their nests. Some people believe it keeps predators away.

Habitat and Distribution of Blue Grosbeak

The blue grosbeak’s range encompasses much of North America, with the majority of its territory lying south of the 40th parallel on the map, while the species’ range is expanding northward.

They can be found in Mexico, Central America, and the West Indies, and have been seen as far south as Ecuador and as far north as Idaho. They are also found in the United States.

A surprisingly difficult bird to discover in many backyards, despite its colorful plumage, is the male blue grosbeak, which prefers to hide in bushes and tangled tangles of vines and briars with its partner. Finding a blue grosbeak is as simple as learning the male’s song and following it about for a few minutes.

A buzzing sound and a “chink” sound are also made by the birds when they are anxious or frightened. Blue grosbeaks can be spotted gleaning seeds from fields during the summer months throughout their summer range.

When the blue grosbeak builds its nest, it creates a cup-shaped structure out of shrubs or tangled vines near an open space or even a highway. The female constructs the nest, which is approximately 3.3 to 10 feet above the ground, from of twigs, strips of bark, scraps of newspaper, dead animals, roots, rags, and even snakeskin, among other materials.

She then surrounds it with little roots, fine grass, and hair to give it a more natural look. The nest’s interior measures approximately 2 inches deep and 2 to 3 inches wide. It is common for this bird to have two broods per year, and as the female begins to construct her second nest, her first brood’s chicks are taken care of by their father.

The blue grosbeak’s scientific name is Passerina caerulea, which means “blue grosbeak.” In Latin, passerina means “like a sparrow,” while caerulea is a Latin word that implies different colors of blue. The blue grosbeak is divided into seven subspecies. They are as follows:

The male blue grosbeak is rather easy to distinguish from the female since the only other bird with that much blue in its plumage and a thick, cone-shaped bill is the lesser indigo bunting, which is significantly smaller. Their respective ranges are seen to overlap in several spots on the maps.

The blue color of the grosbeak, on the other hand, is an optical illusion generated by the way light interacts with its feathers, and the human eye is incapable of seeing all of the bird’s incredible colors. The male is between 5.5 and 7.5 inches in length and has reddish-brown bars on its wings and a streaked back, respectively.

The bill is conical in shape, and the eyes are brown in color. The female is brown all over, with a hint of blue in her feathers if she is viewed from the appropriate perspective. Males and females are roughly of the same size in this species.

With rounded wings and a fan-shaped tail that is midnight blue on top and bluish-gray underneath, the blue grosbeak is a striking bird. The legs of this creature are black. The bird can occasionally be identified by its flight, which is swift and characterized by rapid wingbeats interspersed with the bird tucking its wings against its body every now and then.

Behavior of the Blue Grosbeak

One of the reasons these birds are so difficult to locate is that they are extremely cautious around humans and will flee if they believe they are being observed.

A large number of them can be seen hopping or soaring over the ground in search of residual seeds in cleared fields during the summer months, often in company with other sorts of birds. Nobody knows why they do this, but they also flick their tails and move sideways along tree limbs, which no one understands.

The blue grosbeak breeds in the northern portion of its territory from early spring to late summer, depending on the season. In accordance with its migration pattern, the bird eggs in the southern United States and northern Mexico in the summer, spends its winters on the Mexican coast, in the Caribbean, and in northern South America in the winter. There are some populations in Central Mexico that do not migrate and instead choose to remain in their current location year-round.

Diet of the Blue Grosbeak

A large portion of the bird’s diet consists of insects such as cicadas, crickets, and grasshoppers, as well as caterpillars, beetles, snails, spiders, and other invertebrates, according to the American Bird Conservancy.

They also consume seeds, particularly those that have been left over in fields and pastures. Chocolaty, sour foods like as onions, garlic, apple seeds, and peach and apricot pits, as well as stale bread and table leftovers, are poisonous to them.

Predators and Threats to the Blue Grosbeak

Due to the fact that it feeds on seeds that have been left over from agricultural activities and builds its nests in areas where tall trees have been felled by logging, it appears to have profited from human activity.

Despite this, blue grosbeaks are frequently captured and devoured by cats, hawks, and other predators, and they are frequently parasitized by the cowbird. Unlike other birds, the cowbird lays her eggs in the nests of other birds and then abandons her young to be raised by foster parents.

The blue grosbeak also contains feather mites, and some experts are concerned that if the bird’s range grows, it will become a vector for disease. The good news is that there is no evidence to suggest that these birds are disease carriers.

Predators that prey on songbirds are attracted to these birds and prey on them. Cats, both wild and domesticated, snakes, and birds of prey such as hawks and owls are examples of such creatures. The Blue Grosbeak is a bird that may be found in the United States.

In their nesting range, these birds can begin building their nests as early as the middle of April, however the majority of them begin in May or later. The males arrive first and immediately begin singing in an attempt to attract the females.

She will build the nest when she has chosen her mate, and she will lay between three and five pale blue, freckled eggs in total. She incubates the eggs for approximately 11 to 12 days, during which time the male provides her with food.

The kids begin to fly 9 to 10 days after hatching, and both parents are responsible for feeding them. By late summer, the parents and chicks have moved to open areas where they can forage for seeds, insects, and other tiny invertebrates to feed before embarking on their annual trek northward to breed. In the wild, these birds survive for approximately five years, though the oldest bird was almost seven years old.

Scientists estimate that the blue grosbeak population in the globe is approximately 24 million individuals. Its population is constant, and in some locations, it may even be rising, and its conservation status is of the utmost importance.