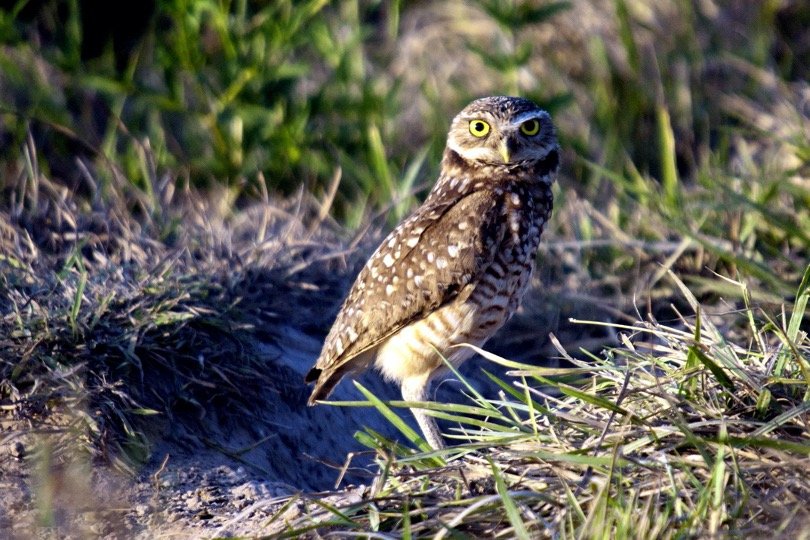 “Unlike most owls, in which the female is significantly larger than the male, the Burrowing Owl’s sexes are almost the same size.” The burrowing owl is a slender, long-legged bird that can be found throughout North and South America.

Despite the fact that they are capable of incredible feats of fancy flying, they actually spend the most of their time on or near the ground. This owl performs a vital ecological role by limiting the abundance of prey in their natural habitats, which helps to maintain a healthy ecosystem.

• An annual Burrowing Owl Festival is held in Cape Coral, Florida, by the Cape Coral Friends of Wildlife organisation every year in February. It is estimated that there are approximately a thousand nesting pairs in the city of Cape Coral.

• Burrowing owls are classified into 18 recognised subspecies that can be found throughout their range. Each one contributes to the ecology of its environment in a significant way.

Habitat and Distribution of Burrowing Owl

Burrowing owls can be found all over the Western Hemisphere, and they are particularly common in the United States. Grasslands, prairies, and agricultural fields are among the open locations where they prefer to roost because they have less foliage or trees.

Nests of the Burrowing Owl

The burrowing owl will build its nest in the burrows of other animals, such as badgers, desert tortoises, coyotes, prairie dogs, and foxes, that have abandoned their homes. Some owls have also been observed digging their own tunnels, according to the research.

Dung appears to be a significant nesting element that may aid to attract insects to a particular area or location. The owls will defend a small home range that encircles the entire nesting territory that they have created.

Known scientifically as Athene cunicularia, the burrowing owl is a species of owl that lives underground. The Greek goddess Athena (who was intimately linked with owls) inspired the name of the genus Athene, and the Latin word cunicularia (burrower or miner) came from a Latin word meaning burrower or miner.

In addition, they have round yellow eyes, very long legs, and no obvious ear tufts to distinguish them from other species. Males and females are difficult to distinguish from one another due to their identical appearance.

In this owl’s social life, monogamous mating pairs serve as the foundation, with groups of owls sometimes structured into relatively loose societies. There are a total of 13 different vocalizations that have been recorded.

Other essential actions such as preening, stretching, and bathing in puddles or dust take up the majority of the remainder of the day’s time. Most of the time, they prefer to stay close to the ground or perched on a nearby bush or fence post.

Only the burrowing owl populations in the very northern reaches of the United States exhibit any migratory behavior during the winter.

The burrowing owl is a carnivore, which means it eats meat. It is estimated that insects and other arthropods account for approximately 90 percent of its total caloric intake. When hunting, they will walk, hop, hover, or run after the prey as it moves across the surface of the earth.

What Does the Burrowing Owl Eat?

Its primary source of nutrition is insects such as grasshoppers, crickets, and beetles, among others. It also preys on mice, ground squirrels, lizards, snakes, earthworms, amphibians, and tiny birds, such as sparrows, among other prey species.

The burrowing owl is threatened by a number of factors, including habitat loss and predators. According to the International Union for Conservation of Nature Red List, it is now categorized as a species of least concern. The Migratory Bird Act of the United States provides protection for the species.

The burrowing owl (or its eggs) is preyed upon by a variety of predators, including bobcats, cougars, coyotes, foxes, and a variety of raptors, including hawks and eagles. An owl attacked will scream and cluck, snapping its bill and thrashing its wings in distress as it flies away. A group of owls may be able to successfully drive away a prospective predator on occasion.

Every year, the burrowing owl creates a monogamous pair bond with its spouse, which lasts for several months. During its courtship ritual, the male performs a lengthy process of preening, singing, and complicated flight displays (in which it rises into the air with its mate and then quickly descends).

In addition, the male brings food to his mate. A single clutch (or possibly multiple clutches) of up to 12 eggs is laid by this bird between February and May, and the clutches are laid in the spring.

After a gestation period of around one month, the newborn chicks will hatch from their eggs and become completely reliant on their parents for their care. The father will provide the majority of the food for the family, while the mother will incubate the eggs and care for the young.

Until the chicks are mature enough to thermoregulate, which means that their bodies produce enough heat to keep them warm, she will not leave them alone. After hatching and leaving the nest, it takes approximately 44 to 53 days for the newborn chicks to become independent.

Juveniles are born with only a few bars and spots on their feathers, but over time they will develop their adult plumage.

A large number of owls are ready to mate by the time the next breeding season begins. It is estimated that the average lifespan in the wild is between six and eight years old. The wild owl with the longest reported lifespan lived to be 11 years old.

There are around two million burrowing owls left in the wild, according to current estimates. Between 1966 and 2015, it is possible that the population decreased by approximately 33%.