o The cytoskeleton is a cellular “scaffolding” or “skeleton” contained within the cytoplasm.

o The cytoskeleton is present in all cells; it was once thought this structure was unique to eukaryotes, but recent research has identified the prokaryotic cytoskeleton.

o It is a dynamic structure that maintains cell shape, protects the cell, enables cellular motion (using structures such as flagella, cilia and lamellipodia), and plays important roles in both intracellular transport (the movement of vesicles and organelles, for example) and cellular division. 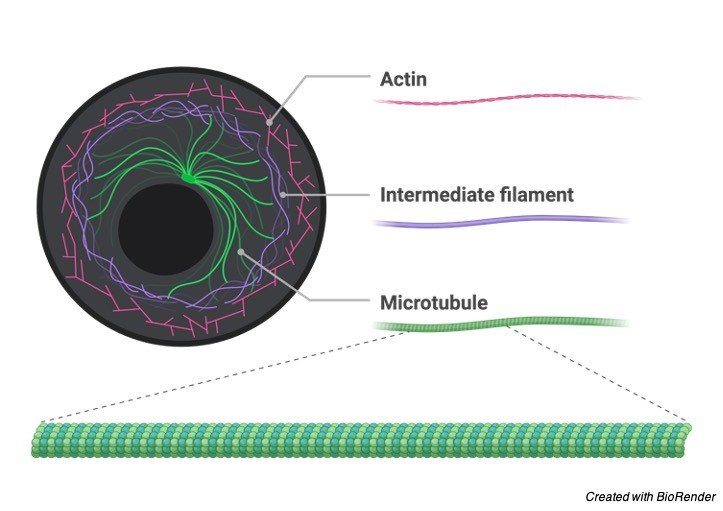 There are two types of filaments in the cytoskeleton;

o Microtubules are built from subunits-molecules of tubulin-each one of which is itself a dimer composed of two very similar globular proteins called a-tubulin and b-tubulin bound tightly together by noncovalent bonds.

o Although tubulin is globular it can polymerize into long straight filaments.

o Thirteen of these filaments lie alongside each other to form the microtubule.

o In nine triplet sets (star-shaped), they form the centrioles.

o Centrioles function in the production of flagella and cilia, but are NOT necessary for microtubule production.

o The major portion of each flagellum and cilium, called the axoneme, contains nine pairs of microtubules forming a circle around two lone microtubules.

o The latter formation is commonly referred to as a “9+2” arrangement, wherein each doublet is connected to another by the protein dynein.

o The mitotic spindle is made from microtubules.

o Mitotic spindle provides the machinery that will segregate the chromosomes equally into the two daughter cells.

o This is because of the polarity of the a and b tubulin, thus making the microtubule polar.

o The – end attaches to a microtubule-organizing center (MTOC) in the cell.

o The major MTOC in animals is the centrosome.

o A microtubule grows away from an MTOC at its + end.

o In mitosis the nuclear membrane breaks down and the centrosome nucleated microtubules can interact with the chromosomes to build the mitotic spindle.

o The centrosome is copied only once per cell cycle so that each daughter cell inherits one centrosome, containing two centrioles.

o The centrosome replicates during the S phase of the cell cycle.

o Microfilaments are the thinnest filaments of the cytoskeleton found in the cytoplasm of all eukaryotic cells.

o These linear polymers of made of actin subunits are flexible and relatively strong.

o Microfilaments produce the contracting force in muscle as well as being active in cytoplasmic streaming, phagocytosis, and microvilli movement, cytokinesis, and muscle movement.

o In fungi, the Septa is usually perforated to allow exchange of cytoplasm between cells, called cytoplasmic streaming.

o Both microtubules and microfilaments are involved in intracellular movements in eukaryotic cells.

o In both cases the movements are generated by motor proteins, which bind to microfilaments and microtubules and use the energy derived from repeated cycles of ATP hydrolysis to travel steadily along the microtubule or microfilaments in a single direction.

o The motor proteins that move along cytoplasmic mircrotubules are: kinesins ( – ⇒ + ) and dyneins ( + ⇒ – ).

o Eukaryotic flagella and cilia are specialized structures also made from microtubules.

o The major portion of each flagellum and cilium, called the axoneme, is arranged in nine doublets oriented about two additional microtubules (wheel-shaped) they form cilia and flagella.

o This formation is commonly referred to as a “9+2” arrangement, wherein each doublet is connected, via a crossbridge, to another by the protein dynein.

o Both cilia and flagella grow from a basal body.

o In humans cilia are only found in the fallopian tubes and the respiratory tract and in cerebrospinal fluid in ependymal cells.

o Bacterial flagella are long, hollow, rigid, helical cylinders made from a globular protein called flagellin, these shouldn’t be confused with eukaryotic flagella which are made up of microtubules.

o They rotate counterclockwise. When they are rotated clockwise, the bacterium tumbles.

o This tumbling acts to change the orientation of the bacterium allowing it to move forward in a new direction.

o A basal body is an organelle formed from a centriole, a short cylindrical array of microtubules.

o It is found at the base of a eukaryotic cilium or flagellum and serves as a nucleation site for the growth of the axoneme microtubules.