What is Hypotonic Solution?

The semipermeable membrane is the cell membrane. So, what occurs when a cell is subjected to hypotonic conditions? A cell exposed to a hypotonic environment will experience an inflow of water, which will cause the cell to expand.

To have a better grasp of this idea, we must first comprehend tonicity. Tonicity is a behavioural word that describes the behaviour or movement of solvent molecules across a semipermeable membrane based on the number of non-penetrating solutes present.

It’s critical to remember that the property is solely influenced by non-penetrating solutes, not the overall number of solutes. With this understanding of tonicity, we can distinguish between three sorts of solutions: hypotonic, hypertonic, and isotonic.

The quantity of non-penetrating solutes in the solution outside the cytosol would be larger than the cytosolic concentration in a hypertonic environment. An osmotic gradient is created across the semipermeable membrane as a result of the concentration differential. This causes the solvent to efflux (“flow out”), which causes the cell to shrink. 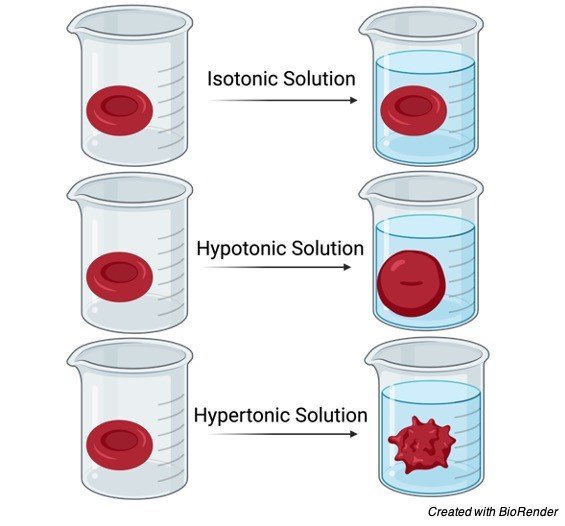 The word tonicity has the prefix ‘iso,’ which means “the same.” As a result, two solutions separated by a semipermeable membrane are said to be isotonic if they contain the same quantity of non-penetrating solutes. A cell will neither shrink nor swell under this circumstance, since there will be no net movement of the solvent molecules due to the lack of an osmotic gradient. With blood serum, any solution with a tonicity of 280 – 300 mOsm/liter is considered isotonic. The typical example of an isotonic solution is 0.9 percent sodium chloride.

Tonicity (which means “push” or “thrust”) has the prefix “hypo,” which implies “low.” Hypotonic solutions have a low number or concentration of non-penetrating solutes in contrast to the other solutions across a semipermeable barrier, according to biology. When a cell is submerged in a hypotonic solution, the amount of non-penetrating solutes decreases as the water concentration rises.

An osmotic gradient is created as a result of the hypotonic environment, which leads to the flow of the solvent or water into the cell, causing the cell to expand. A cell in a hypotonic solution will expand and finally lyse as a result.

The rupture of the cellular membrane caused by an osmotic gradient, a virus, or enzymes is known as lysis. The activity of lyse is referred to as lysis. The breakdown of big particles into smaller ones is referred to as lyse. As a result, these agents are classified as lytic because they can cause total rupture of the cellular membrane, resulting in cell death.

It is critical to distinguish between the word’s plasmolysis and cytolysis in this section. Plasmolysis is the shrinking of a cell caused by the outflow of water from the cells in a hypertonic environment. The lack of a cell wall causes the cells to shrink in animal cells.

Water efflux from plant cells, on the other hand, causes the cellular membrane to rupture from the cell wall, resulting in gaps or pockets between the cell wall and the cellular membrane. When a cell is put in a hypotonic solution, it undergoes cytolysis. Water molecules will flow inside the cell due to the osmotic gradient, causing the cell to expand and finally rupture and lyse. Only animal cells and protozoa undergo cytolysis.

Plant cells are protected from cytolysis by having a cell wall and vacuoles. The extra water is taken up by the vacuoles, which pushes the cellular membrane towards the cell wall, resulting in turgor pressure.

As a result, plasmolysis and cytolysis occur in opposite directions in hypertonic and hypotonic environments, respectively. The tonicity of a solution refers to the osmotic pressure or tension of a solution, as cells inflate or shrink in response to the environment’s tonicity. It influences the direction in which two solutions diffuse.

The concentration of solutes between liquids separated by a semi-permeable plasma membrane influences tonicity in cells (cell membrane).

Hypotonic, hypertonic, and isotonic solutions are the three kinds of solutions characterised by tonicity. The osmotic pressure of a hypotonic solution is lower than that of the solution being compared to.

Is it true that water is a hypotonic solution?

Tonicity is required to keep life processes running smoothly. Protists without a cytoskeleton or a cell wall, such as paramecia and amoebae, are able to maintain a rigid structure thanks to tonicity control. Because these protists live in a hypotonic environment, there is a constant input of water. These protists have a specialised organ known as contractile vacuoles that collect an excess of water from the cell and subsequently discharge it out to keep the cell structure and prevent cell lysis.

The production of turgor pressure in plant cells is caused by a constant inflow of water in a hypotonic environment. Turgor pressure is used by plants to impart structure and stiffness to their structures.

Fungi (such as mushrooms) and plants control their environment in order to keep their cells hypotonic. The entry of water will result in the creation of turgor pressure as a result of the hypotonic environment. As a result, cells remain upright, retaining the stiffness of their structure.

This pressure is also used by plants to move water throughout their bodies, from the roots to the top stem. When plants are not watered for an extended period of time, a hypertonic environment forms around them, and their turgor pressure decreases, giving them a wilted appearance.

When such plants are re-watered, turgor pressure is restored, and the plants regain their form and structure. Because of the high salt concentration, marshy regions and mangroves have a hypertonic environment. In such severe hypertonic circumstances, a typical plant will wilt.

Mangroves, for example, have evolved to generate a hypertonic cytosolic state in their root cells because they grow in marshy regions. As a result, a hypotonic external environment around the roots aids in the absorption of water from the environment.

Similarly, all aquatic creatures, whether they live in saltwater or freshwater, have a system called osmoregulation that allows them to manage the effects of osmosis. Salt concentration in the water is important for aquatic life in any water body because of this osmoregulation. With the aid of salt glands, sea turtles have evolved to generate a hypertonic interior environment.

The exterior environment becomes hypotonic for them as a result of the hypertonic internal environment, allowing these marine creatures to survive even in a very hypertonic environment.

Freshwater fish cannot thrive in seawater and vice versa due to tonicity and the osmotic gradient. One example of a hypotonic solution is freshwater. As a result, freshwater fish cells have a greater salt content than the water in the surrounding river or lake. These fish have evolved a mechanism to drain away extra water from their bodies on a regular basis.

Freshwater fish, on the other hand, would have hypotonic cells compared to the external hypertonic environment if they were exposed to saltwater. In such circumstances, their bodies will lose water, causing them to get dehydrated and finally die. As a result, changes in the salt content of water have a significant impact on the fish population in any body of water.

Because of the plasma membrane, not all solutes can enter or leave the cell. The plasma membrane is a crucial component of the cell that controls the flow of ions and molecules into and out of it. As a result, there are variations in solute concentrations between the cytosol of the cell and the fluid surrounding it.

Neurological symptoms such as nausea, headache, disorientation, unconsciousness, weakening or absence of tendon reflex, stupor, and lethargy develop as a result of the sodium imbalance, finally leading to coma and death. It’s crucial to realise that hypotonic dehydration involves cellular swelling and edema caused by excessive water retention.

Excessive fluid loss from wounds or burns, persistent diarrhoea, Addison’s illness, renal tubular acidosis, prolonged use of intravenous hypotonic fluids or normal saline in patients, Cystic fibrosis, and chronic use of diuretics can all contribute to this condition.

Treatment for hypotonic dehydration is usually started with 3 percent hypertonic saline or 0.9 percent isotonic saline (depending on the severity of the disease) and constant monitoring of blood sodium levels to prevent myelinolysis, as recommended by doctors.

What is Hypertonic Solution? Definition, and Examples

Thanks, that helped a lot