o In humans, only the spermatogonium and the oogonium (both diploid) undergo meiosis.

o All other cells are somatic and undergo mitosis.

o The gametes are haploid.

o After replication occurs in S phase of interphase, the cell is called a primary spermatocyte or primary oocyte (both diploid).

o In the human female, replication takes place before birth, and the life cycle of all germ cells are arrested at the primary oocyte stage until puberty.

o Meiosis is two rounds of division called meiosis I and meiosis II.

o Meiosis I proceeds similarly to mitosis with the following differences. 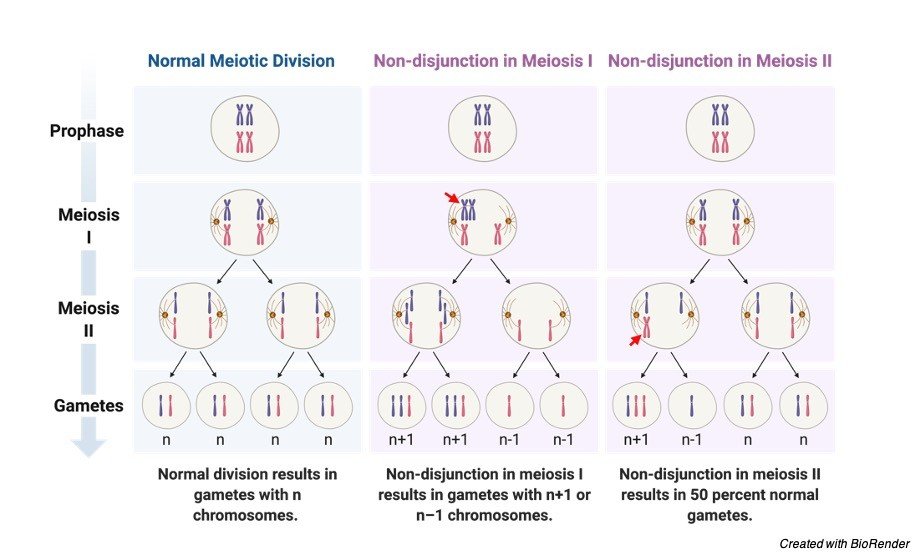 In prophase I homologous chromosomes line up along side each other, matching there genes exactly.

o At this time, they may exchange sequences of DNA nucleotides in a process called crossing over (synapsis).

o Genetic recombination in eukaryotes occurs during crossing over.

o You can also have Double crossovers:

o Scenario 2: results in genetic recombination. The chromatids exchange alleles during a crossover. Then, one of the crossover chromatid exchanges with a different chromatid. This is called the 3-strand double crossover. Results in 2/4 recombinants.

o Scenario 3: results in genetic recombination. The chromatids exchange, then 2 totally different chromatids on the same chromosome exchange. This is called the 4-strand double crossover. Results in 4/4 recombinants.

o Since each duplicated chromosome in prophase I appear as an ‘x’, the side by side homologues exhibit a total of four chromatids, and are called tetrads.

o If crossing over does occur, the two chromosomes are “zipped” along each other where nucleotides are exchanged, and form what is called the synaptonemal complex.

o A chiasma (plural: chiasmata) is thought to be the point where two homologous non-sister chromatids exchange genetic material during chromosomal crossover during meiosis.

o Sister chromatids also form chiasmata between each other, but because their genetic material is identical, it does not cause any change in the resulting daughter cells.

o Genes located close together on a chromosome are more likely to cross over together, and are said to be linked!!!

o In metaphase I the homologues remained attached, and move to the metaphase plate.

o Rather than single chromosomes aligned along the plate as in mitosis, tetrads align in meiosis.

o Anaphase I separates the homologues from their partners, the centromeres stay together (which is different from anaphase in mitosis).

o If cytokinesis occurs, the new cells are haploid with 23 replicated chromosomes, and are called secondary spermatocytes and secondary oocytes.

o In the case of a female, one of the oocytes, called the first polar body, is much smaller and degenerates (it may or may not go through meiosis II).

o This occurs in order to conserve cytoplasm, which is contributed only by the ovum.

"These four phases together are called meiosis I. Meiosis I is reduction division"

o The final products are haploid gametes each with 23 chromosomes.

o In the female, telophase II produces one gamete and a second polar body.

o If during anaphase I or II the centromere of any chromosome doesn’t split, this is called nondisjunction (it can also happen in mitosis but the ramifications are less severe).

o Complete extra chromosome) and the other will be missing a chromosome.

o If nondisjuction occurs in anaphase II that will result in one cell having an extra chromatid and one lacking a chromatid.

o The number of different possible gametes that can be formed by diploid organisms as a result of independent assortment of chromosomes during meiosis can be calculated by using the formula 2^n where n is the number of heterozygous genes.

o Parthenogenesis (means the growth and development of an embryo or seed without fertilization by a male.

o As with all types of asexual reproduction, there are both costs and benefits associated with parthenogenesis.

o A normal female with XX inactivates one of her X’s while expressing the other.

o She therefore has 1 Barr body.

o A normal male, who is XY, does not inactivate his only X chromosome, and therefore has no Barr bodies.

o Ex. A person with 2 Barr bodies has to have 3 X chromosomes.