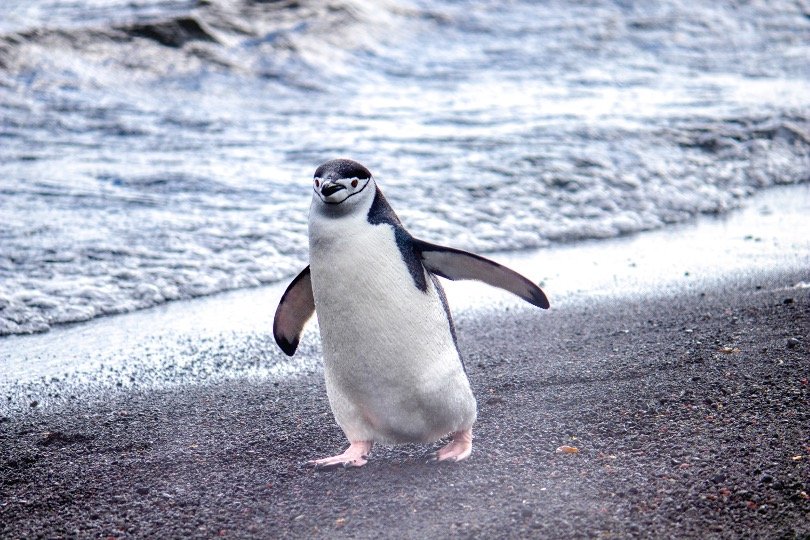 “The world’s largest chinstrap penguin colony has more penguins than the entire city of San Francisco!” All penguin species, except for the chinstrap penguin, are found in large numbers. In fact, one of their colonies, which is located on a distant island, contains more than a million breeding pairs of penguins!

• Indeed, the chinstrap penguin population on Zavodovski Island in the South Atlantic Ocean is so enormous (it is expected to have 1.2 million breeding pairs) that it has been designated as the world’s “Largest penguin colony!” by the Guinness Book of World Records.

• To put things in perspective, the island has more penguins than the city of San Francisco! In order to see what this fantastic colony looks like, simply scroll down to the “population section!” page.

• Chinstrap penguins are one of the most violent penguins in the planet.

Besides the chinstrap penguin, it is also known by other names, including ring-tailed penguin, bearded penguin, and stonecracker penguin, the latter of which was given to it because of its loud and obnoxious call.

Despite extensive research, the origin of the term penguin remains a mystery: One suggestion is that it comes from the Welsh words “pen” for head and “gwyn” for white, which both signify white.

Appearance and Behavior of the Chinstrap Penguin

Their toes are pink, while the soles are black. Young penguins have a greyish face that will develop the markings of an adult penguin after 14 months of development. The chinstrap penguin is not the largest of the penguin species; rather, it is a medium-sized bird.

A typical adult’s length is 75 cm (29 inches), and their average weight is 5.5 kg (12 pounds). When it is in its breeding colony, this penguin’s voice can be heard from a long distance.

They are frequently engaged in combat and have been observed to wave their heads and flippers, bow, cry, gesture, and preen their coat. They may glare, point, and charge at each other when there is a territorial disagreement.

Due to the fact that chinstrap penguin is highly social, it can be found in colonies alongside other penguins, such as the Adélie penguin and cormorants, as well as with other related species. Their nests are modest, and they are built in rocky crevices.

They are the most aggressive of the brush-tailed penguins when it comes to protecting themselves against other species and against one another.

Habitat of the Chinstrap Penguin

When the chinstrap penguins roost on ice, they may be joined by other penguin breeds, such as the Adélie penguin. This species of penguin is known for being the most aggressive of all. They spend the majority of their lives at sea, where they may eat small fish and krill.

They inhabit Antarctica as well as the the South Shetland Islands, Scotia Sea, South Sandwich Islands, and the, the South Orkney Islands where the largest of their colonies may be found.

They can also be found in the Arctic Ocean. They are found on the Southern Ocean’s seashore, and their natural environments are typically rocky or sandy. A few hundred birds live on the Balleny Islands, which are part of the Ross Dependency area, not far from New Zealand.

Diet of the Chinstrap Penguin

The chinstrap penguin takes pleasure in diving. It may catch a few fish, squid, and shrimp, but a major part of its food comes from krill, which it consumes in large quantities.

Krill, which have an estimated biomass of 379 million tonnes in the Southern Ocean, are numerous in the seas near the chinstrap penguin colonies, where they have established their homes.

Although, with average air temperatures increasing considerably (by as much as 5 to 6 degrees Celsius) in many of the places where penguins hunt krill, the rise and fall of krill populations has been postulated to be the driving force in penguin population changes.

Predators and Threats to the Chinstrap Penguin

Leopard seals and killer whales are the most significant predators of the adult chinstrap penguin population. During the breeding season, leopard seals have been seen to consume between 1.4 and 5% of a penguin colony, according to research.

Leopard seals pursue chinstrap penguins in the shadows, and they rely on their stealth to succeed. They hang out at the margins of ice sheets where penguins have congregated, and they catch penguins as they dive into the ocean to drown.

In general, once chinstrap penguins have ventured into open water, they face fewer risks than they did before. Sea lions and sharks are examples of other predators. The eggs and chicks are at danger of being eaten by skuas, which are large predatory sea birds.

Climate change, which has reduced the number of krill in the ocean, is the most serious threat to leopard seals, as it is to other penguin species as well.

Once a chinstrap penguin has discovered a mate, he will return to that individual year after year, forming a special bond with that individual. During the breeding season, which runs from November/December to March, the chinstrap penguin lays two eggs, which are normally laid at a later time than the eggs laid by other penguin species in the area.

After that, it goes on to hang out with a group of young chinstrap penguins. A chick is the name given to a baby penguin. In some cases they may also be referred to as nestlings. A gathering of baby penguins is referred to as a crèche, and it is where the chicks congregate for warmth as well as protection from predators.

This gives the parents the opportunity to go food hunting and bring back supplies. A little over two months after hatching, the fluffy down has been replaced by waterproof feathers, and the chick is now ready to embark on its first voyage to sea to go hunting on its own.

The International Union for Conservation of Nature (IUCN) assessed the chinstrap penguin population at 8 million individuals in August 2018. The chinstrap penguins are the most numerous of all penguin species and are classified as “Least Concern,” despite the fact that their overall population is falling.

They can be found on the Antarctic Peninsula, as well as the circumpolar, Sub Antarctic, and Antarctic islands. When they are mating, they do not go over ice, but rather remain on the rocky coast.

The most populous colony of chinstrap penguins may be found on Zavodovski Island, which is an island in the South Sandwich Islands and is home to more than a thousand individuals.

It is estimated that this island supports more than a million breeding pairs of chinstrap penguins, despite being just 3 miles (5 km) long and 3 miles wide. Chinstrap penguins have been observed in the following locations in addition to Antarctica:

Their greatest colony has been dubbed “the smelliest spot on the face of the planet!”

Having more than a million mating pairs of penguins crammed into a tiny island that is only 3 miles (5 km) wide, it’s no surprise that Zavodovski Island has a squalid and odoriferous environment. However, in addition to the terrible aromas produced by penguin droppings, sulfuric air from an active volcano on the island also contributes to the problem. According to the Telegraph newspaper in the United Kingdom, the island’s features are known as Stench Point, Pungent Point, and Noxious Bluff, among other things, because they smell so bad.

A volcano threatens their largest colony, which is also their most populous.

Mount Curry is the name of the stratovolcano on the island that is home to the world’s largest colony of chinstrap penguins, and it began erupting in March of 2016. In addition to covering much of the island in ash, the eruption occurred at a time when the penguin population had begun to leave their breeding grounds to feed at sea until fall, which mitigated the effects of the eruption.

It was on Zavodovski that producers of the documentary series Planet Earth II shot chinstrap penguins in their natural habitat. It took more than a year of planning to travel to the distant island, and the documentary crew had to navigate some of the roughest seas on the planet just to film this remote scene.