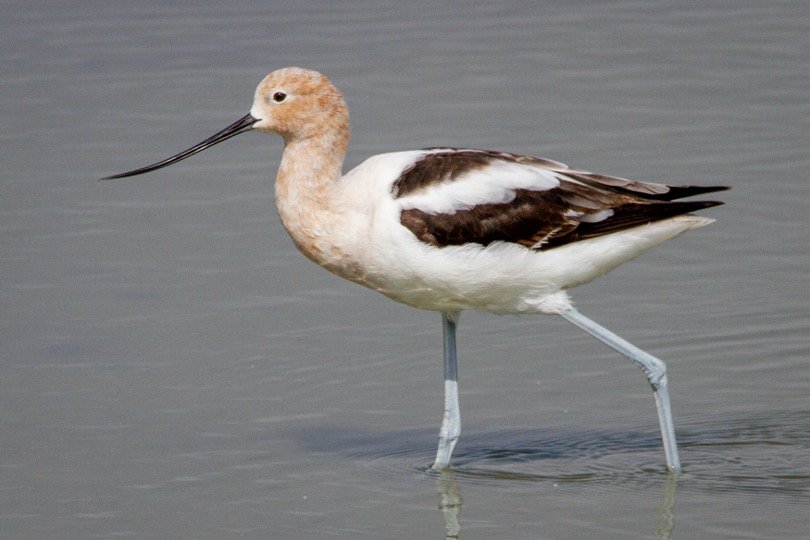 The avocet is a species of wading birds that can be found near freshwater and saltwater areas all over the world, including the United States. Their long, sinewy legs give them the appearance of walking on stilts, although they are not!

The word avocet is supposed to have originated from the Italian name avosetta, which means “avocet bird.” Others birds that reside and feed near bodies of water are the ones to which they are most closely related.

Interesting Facts About the Avocet

Avocet birds appear to prefer salty areas over freshwater habitats if given the opportunity, but both types of habitats are suitable for their needs. The pied avocet is depicted on the logo of the Royal Society for the Protection of Birds, which is a nonprofit organization based in the United Kingdom and Ireland.

When becoming extinct in Britain by the early twentieth century, this species was reintroduced in the 1940s after marshes had been reclaimed from agriculture. The avocet bird is occasionally mistaken for the stilt, which is closely related to it.

This bird has a wide range of distribution, and can be found along beaches, saline flats, lakes, and ponds all around the world. The genus has four species, each of which has a distinct geographic distribution and habitat.

Throughout Mexico, the Western United States, and parts of the Atlantic Coast is the American avocet’s natural habitat. The Andean avocet is a bird that is found only in South America’s Pacific region.

The pied avocet has a wide range that includes coastal Europe, Africa, Central and southern Asia, and parts of the Middle East. Finally, the red-necked avocet is a species that is indigenous to Australia.

Nests of the Avocet Bird

The avocet prefers to nest in loosely structured colonies near the shores of big bodies of water, where it can find protection from predators. The nest, which is constructed entirely of basic soil, stones, and other debris, is modest and easily concealed within small depressions. If the water level rises, the birds will be able to raise the nest to the height of a foot-tall mound.

Known scientifically as Recurvirostra, the avocet is a species of bird. Despite the fact that this word looks to be difficult to pronounce at first glance, it is simply a mixture of two simpler Latin words: recurvus, which means curled backwards, and rostrum, which means bill. The avocet is closely related to the long-legged stilts, which are also members of the Recurvirostridae family of birds.

The avocet is a long, sinewy bird that may grow up to 20 inches in length from head to tail (with a wingspan of roughly 30 inches from one tip to another). It has a number of distinguishing characteristics that set it apart from other birds.

The lengthy, bluish or grey legs are well-suited for wading into the water when necessary. Because of their webbed feet, they are able to become good swimmers. Furthermore, the lengthy bill is an extremely well-suited device for feeding. There is a combination of black, white, red, and brown feathers on the bird.

Beak with a Slight Curve

The long, slender bill with an upturned tip at the end is perhaps the most distinguishing trait (aside from the long legs). Avocets wade into shallow water to feed, leaning forward and placing the slightly open tip of their bills on the bottom of the water.

The avocet can stir up microscopic prey that is concealed in the soil by sweeping its head from side to side, and then filter out food fragments with its bill. Females and males are generally similar in appearance, although the bill of some species serves as a distinguishing feature.

When compared to the male, the female has a shorter and more upturned bill, whilst the male has a longer and straighter bill.

Avocets live in big, boisterous colonies of hundreds of individuals outside of their typical breeding season. Despite the fact that they are not particularly cooperative creatures, they will band together to fiercely defend the colony against predators and dangers (though they will sometimes allow stilts to congregate with them).

When it comes to dealing with predators, these highly intelligent birds employ a variety of tactics. They will occasionally generate loud, obnoxious noises in order to give a diversion.

Alternatively, they may pretend to be injured in order to divert the predator’s attention. They may even dive bomb the predator in an attempt to scare it away from them.

The avocets communicate with one another by making loud and repetitive sounds that become increasingly intense over time. Each of these phone conversations communicates specific information to the other about the identity of the individual or the presence of an intruder to the other party.

Male avocets will combine their calls with intricate displays of squatting, dancing, and bowing in order to attract a partner. The avocet is a crepuscular bird, which means that it is most active in the early morning and late evening hours.

Avocets are good swimmers, because to the webbed feet on their feet. In addition to their regular feeding activity using their bill, avocets will occasionally “tip up” like ducks when they are in deeper water.

This occurs when the lower half of the animal’s body is submerged in water while reaching down to feed. They are also excellent flyers, and they have the ability to travel large distances.

In addition, the avocet has specific migration patterns that are visible throughout the year. To give an example of this, the American avocet prefers to reproduce in a vast length of land extending from New Mexico to southern Canada.

During the winter months, it goes south to Mexico or east to Florida and the Atlantic Coast, depending on the location. The pied avocet, on the other hand, is a bird that breeds across Europe and Central Asia.

Some populations migrate as far south as Africa for the winter, while others remain much closer to their original breeding habitats.

Prey and Predators of the Avocet

In the environment, this bird plays a critical regulatory role by maintaining a balance between prey and predator populations. During foraging hours, whole groups of people will line the shore in search of food, creating a quite spectacular spectacle.

What Does Avocet Eat?

They eat a wide variety of tiny crustaceans, insects, and fish larvae, among other things. Seeds are occasionally used in the diet as a supplement.

However, avocets prefer to nest in areas where most other creatures find it difficult to gain access to their nesting sites, such as areas where foxes, skunks, and weasels live.

The American avocet, at least, has been observed to create a strong monogamous bond with its spouse, according to research into the species. By engaging in a series of intricate courtship rituals, such as kneeling and bowing, it will indicate its interest in a potential partner.

In fact, when it comes time to mate, this is the only species of the four that develops breeding plumage that is practically pink or red in hue. The American avocet lays an average of four eggs per clutch, according to the National Wildlife Federation.

The eggs will be incubated for around three to four weeks by both parents, taking turns. The newborn chicks, who are born with downy feathers, are ready to begin their independent lives as soon as they emerge from the egg since they have already demonstrated the capacity to hunt and swim on their own.

After four to five weeks of age, their feathers will be fully developed and they will be ready to take their first flight. The American avocet has a life expectancy of approximately nine years on average, despite the fact that it can live up to 15 years in the wild.

Because it takes around a year for the avocet to reach sexual maturity, it has a limited number of breeding seasons in which to effectively raise children.

The International Union for Conservation of Nature (IUCN) Red List has found that all four species deserve to be classified as least concern, which indicates they are not in imminent danger of extinction.

Avocets were historically heavily hunted in the 19th and early twentieth century, but according to Partners in Flight’s population estimates, there may be up to 450,000 mature American avocets in the wild, thanks in part to the protection afforded by the United States Migratory Bird Act.

The Eastern United States, according to reports, is also seeing an increase in the prevalence of this disease. The loss of habitat for this species is the most serious issue it faces today. During the first 200 years of the United States’ existence, it is believed that approximately 60 acres of wetlands were destroyed every hour.

Scientists have now begun to notice and appreciate the role that wetlands play in the ecosystem, and a slew of reclamation efforts are currently underway to return ecosystems to their pre-industrial state. Another concern to the avocet, in addition to environmental degradation, is that their nests are sometimes destroyed by flooding, pollution, and trampling.