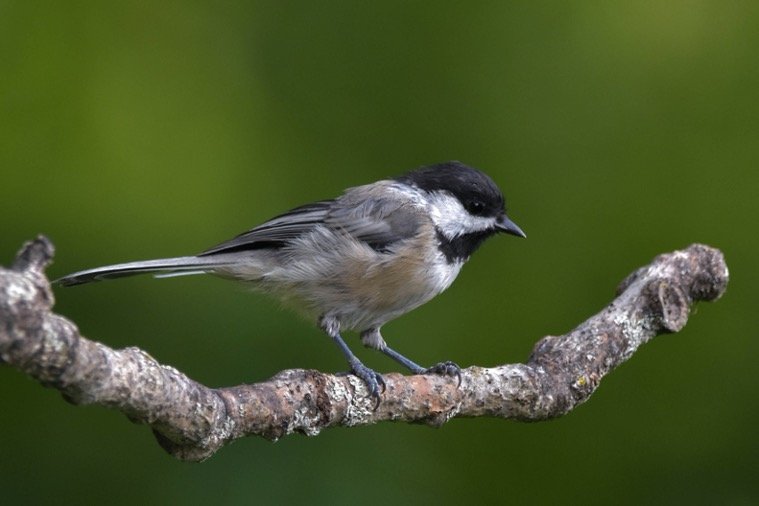 According to Wikipedia, “Chickadee species are named for their plumage as well as their geographic location and warning call or song.” Chickadees are a common feeder bird in North America, where they can be found in abundance.

They can be found in backyards all over the continent, singing and making sounds like “fee-bee” and “chick-a-dee-dee-dee” and other similar phrases. The vivid black and white markings on the backs of these sociable birds make them easy to identify.

• A warning call is made by these birds, which is identified by the sound “chick-a-dee-dee-dee.” Their standard tune has the sound of “fee-bee.”

• The number of “dees” in the alarm call is utilized to determine the identity of the prey. Other bird species are likewise aware of the significance of the phrase.

• North America and Eurasia are home to the grey-headed chickadee, which has a grey head. It is referred to as the Siberian tit in the latter instance.

• These species, in contrast to other birds, will not re-use an old nest. They construct a new one for each brood, which can total up to two per year.

Habitat and Distribution of Chickadees

These birds can be found throughout North America, from the east coast to the west coast, and from Canada to northern Mexico, and are particularly common in the Pacific Northwest. Despite the fact that their typical habitat is mixed deciduous and coniferous forests, they have thrived in parks and communities as well.

Chickadees in the boreal region can be found in Canada, while chestnut-backed chickadees can be found on the continent’s Pacific coast. It is possible to find the Mexican chickadee in Arizona and New Mexico.

The grey-headed chickadee is a holarctic species, which means that it can be found throughout the world’s northern continents, including the northernmost parts of the Arctic Ocean. You may attract these birds to your own backyard if you work hard enough.

If you set out a seed feeder, they will almost certainly come every day. You can also hang a birdhouse from a tree to entice them to build a nest in your yard.

These birds build their nests in cavities. Building nests in tree holes or similar structures, such as a birdhouse, that are 10 to 15 feet above the ground is a favorite activity for them. The majority of the time, partners will excavate several potential nest sites before settling on the one that they will utilize.

They construct a nest of moss and soft materials in the soft, rotting wood of the tree over a period of many days, which they then abandon. During each year’s nesting season, which lasts from April through June.

Scientific Names for the Chickadee

In North America, there are seven different species of these birds. They are members of the genus Poecile, which is found in the family Paridae of the order Passeriformes. There are also representatives of this genus with a similar appearance throughout Europe. In the United Kingdom, however, they are referred to as tits or titmice rather than chickadees.

The following are some of the most frequent chickadee species:

Poecile is a genus that contains seven species as well as eight tits, for a total of 15 species in the genus.

All species have a characteristic look, consisting of a grey hue with black and sometimes rose markings on the body. The black-capped chickadee is one of the most common bird species in the United States. It measures 5 inches (12 cm) in length and has a dark cap and bib, which gives it its name.

Some species, such as the chestnut-backed chickadee, have conspicuous reddish-brown markings on their backs and wings. The shortest one measures only 2.4 inches (6 cm) in length. August to February, these birds congregate in small groups during the fall and winter months of the year.

Other species of birds, such as downy woodpeckers, nuthatches, and tufted titmice, may be included in this category. As the spring season approaches, couples disperse from their flocks in order to mate and rear their offspring.

These birds do not migrate, but rather remain close to their breeding areas throughout the year. Cold-weather adaptations include fluffing their feathers and reducing blood flow near the skin, which helps these birds regulate their body temperature.

On really cold nights, they are able to live by entering a state known as torpor, which is a form of suspended animation in which the metabolism slows down and the body temperature decreases by approximately 10 degrees. When the temperature rises, the “frozen” birds come to life.

Diet of the Chickadees

This species of bird is a sure-fire bet for your birdfeeder because of their nutrition. When they are at a feeder, they frequently take turns feeding one bird at a time. They also exhibit a distinct behavior known as caching, in which they store food in crevices or under branches.

They can come back to it for up to a month after that. These birds frequently congregate in “bird guilds,” feeding together with a variety of different species. They get along because they all forage for food in different ways, which allows them to coexist.

When a nice morsel is discovered, the chickadees in the flock get overjoyed and concentrate their efforts on that particular place.

What Do Chickadees Eat?

Seeds, insects, and berries are among the favorite foods of these birds. It is also common for them to ingest insect larvae and eggs during the breeding season. Insect protein accounts for 50 to 80 percent of their total calorie intake.

Because they are a little bird, they must keep an eye out for predators from above. Shrikes, hawks, and owls are examples of such birds. Eggs and young birds are particularly vulnerable to predation by tree-climbing animals such as cats and raccoons.

Snakes are also a potential threat. Having many nest sites allows these birds to avoid predators since they have more options. In the event that a predator discovers their nest, they will build another one a short distance away.

Adults are the most common target for predatory birds of prey.

Although these birds do not have elaborate mating rituals, the males of the species would attempt to chase away competitor males from their area. Females lay six to eight white speckled eggs after locating a suitable nesting place for her brood.

She will incubate the eggs for around 12 days while the male will provide her with nourishment. Once a young hatches, the female will keep it warm at all times for several days to ensure that it survives. The young birds are fed by both the male and female birds, and they leave the nest after 16 days.

Chickadee chicks have a 20 percent chance of surviving their first year. These birds have a usual lifespan of two to three years, but they can live for far longer periods of time.

In 2011, a bird that had been banded nine years ago was recaptured and released. It was believed to be two years old when it was banded, but it lived to be eleven and a half years old at the time of banding.

While the exact numbers of black-capped, Carolina, boreal, and other chickadee species are unclear, backyard bird counts conducted in recent years have revealed that their numbers are increasing.

As a result of the West Nile virus in the early 2000s, the population of these birds declined, although they have since recovered in recent years. The bird’s conservation status is unlisted or unknown; it is not currently considered to be an endangered or threatened species.