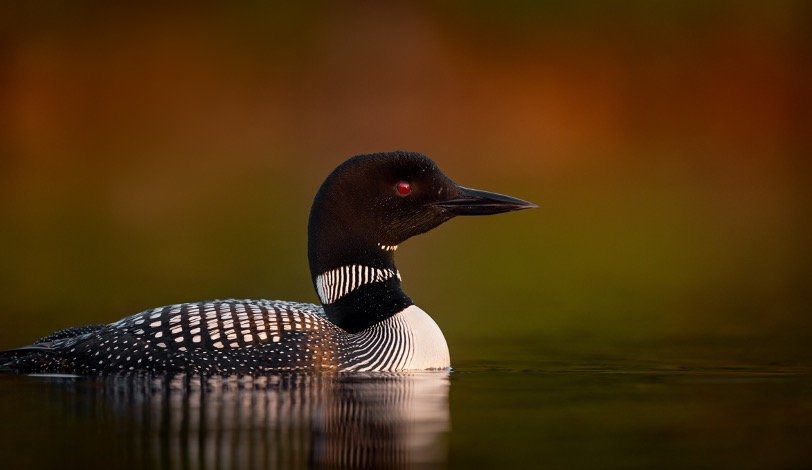 The common loon is a deft hunter on the water, despite its ungainly appearance on land. This predominantly cold-weather duck learns to dive prior to learning to fly and returns to the same nest with the same mate year after year for nearly a decade.

The bird has made its way into a variety of indigenous North American mythologies, and it also serves as the face of the Canadian one-dollar currency. This bird continues to thrive in Canada and other parts of the world, however pollution has destroyed common loons from much of eastern North America.

Despite the fact that the name “loon” is derived from its amusing gait, it is almost certainly better described by its other English name: “Great Northern Diver.”

Amazing Facts About the Common Loon!

• Deep diver (deep sea diver): Known as the common loon, this bird is capable of diving to depths of more than 200 feet to capture fish.

• Already well-known: The common loon is shown on Canada’s one-dollar coin, which is known as the “loonie.”

• Frequent-flyer: When migrating, the common loon has been known to fly hundreds of kilometres!

• Loud and proud: When the loon is claiming territory, it makes a characteristic “yodel” that may be heard across the landscape.

Gavia immer is the scientific name for the common loon, which is also known as the “Great Northern Diver.” It’s possible that gavia originates from the latin phrase for seabird, while immer derives either from a Norwegian word for “ash” (because of its look) or the latin terms immergo or immersus, which indicate “submerged” or “diving,” respectively.

Appearance and Habitats of Common Loon

The loon is similar in appearance to many other ducks, with the exception of its pointed bill, which resembles that of a songbird. The feathers of the common loon are predominantly black, with a pattern of white spots over its wings and throat, as well as a white underside. Its underbelly is also white.

People who live in or near loon habitats are familiar with the sounds made by these birds. There is a distinct yodel, a weeping sound, and a hooting sound among the other sounds. The call of the common loon is used to attract a partner or to announce the location of a nesting place.

The common loon’s feet are a distinctive feature

When compared to other water birds, the feet of a common loon are positioned further back on its body. Because of this, they are superb swimmers and divers. When it walks on land, it, on the other hand, appears uncomfortable.

It is claimed that the walk’s amusing appearance is what gave it the nickname “loon.” Its distinctive feet also distinguish it from other ducks. Instead of using their feet to skim across the water, common loons must skim across the surface of the water using their bellies.

Cooler climates adjacent to bodies of water are the areas preferred by the common loon. In Canada, they are most frequently encountered, and they are particularly common in New England.

Diet of the Common Loon

A large amount of fish is consumed by the common loon. It is skilled in diving into water to seek for prey. Depending on where it spends the most of its time, the type of fish that a common loon consumes is determined.

A common loon will initially poke its head under the surface of the water before beginning to hunt. Once it spots its target, it can dive as deep as 200 feet to catch it. Smaller fish can be swallowed intact; however larger fish must be transported to a location where they can be consumed.

Humans are the most serious hazard to loons, albeit the danger is not life-threatening for them. Common loons have become extinct in eastern North America as a result of pollution in the water.

The common loon, on the other hand, is classified as “least concern” by the International Union for Conservation of Nature, which means that species is not currently in danger of extinction.

It is also possible for common loons to have their eggs stolen by tiny creatures. When this occurs, it is possible that it will move nesting locations.

Because the common loon loves the same type of water in which it was born, toxic water poses a threat to the species’ survival. Thus, according to recent research, a common loon that was born in an impoverished lake will seek out an equally impoverished lake to raise its young later in life, if it ever does.

It will seek out this type of lake, regardless of whether or not that lake has fewer fish or is less conducive to hatching new chicks.

Common loons are monogamous, which means that the same male and female will reproduce year after year. Common loons have a lifespan of approximately ten years and they breed once a year. They will continue the same for the majority of their lives.

A common loon female will give birth to two baby loons, often known as chicks every year. This is significantly less than the average water bird. In one year, a female mallard duck can lay as many as 13 eggs, depending on the species.

Common loons will typically construct a nest near the edge of a body of water, primarily from of sticks, reeds, and grass. Every year, they return to the same nesting spot or location. If the eggs are taken away by predators, the male may decide to relocate the nest.

The breeding season for common loons begins at the age of two. During the early summer, they will find a partner, and the two of them will stake out a nesting location by circling it overhead and producing a yodelling call together.

Typically, the mother will lay two eggs per clutch. The eggs of the common loon will sit for about a month before hatching, with both parents taking turns sitting on the eggs throughout that time. After hatching, the chicks are fed by both the mother and the father while they are growing.

It will take nearly three months for the chicks to learn to fly, but less than a week for them to learn to swim and dive. After the chicks have reached adulthood, the male and female will travel independently to a wintering location for the winter. The two then return to the same breeding area at the start of each summer season to reproduce.

According to the International Union for Conservation of Nature (IUCN), there are around 640,000 common loons in the globe. In North America, and mainly in Canada, the majority of these loons can be found. It is estimated that approximately 2,600 common loons live in Europe.

While the population of North America appears to be increasing slightly, the International Union for Conservation of Nature (IUCN) reports that it is dropping in Europe.