They don’t differentiate in order to acquire a permanent form, size, or function; instead, they stay tiny, immature, and cytoplasmically dense, with high respiration rates. Meristematic tissues are divided into two categories based on their origin: primary and secondary meristems. 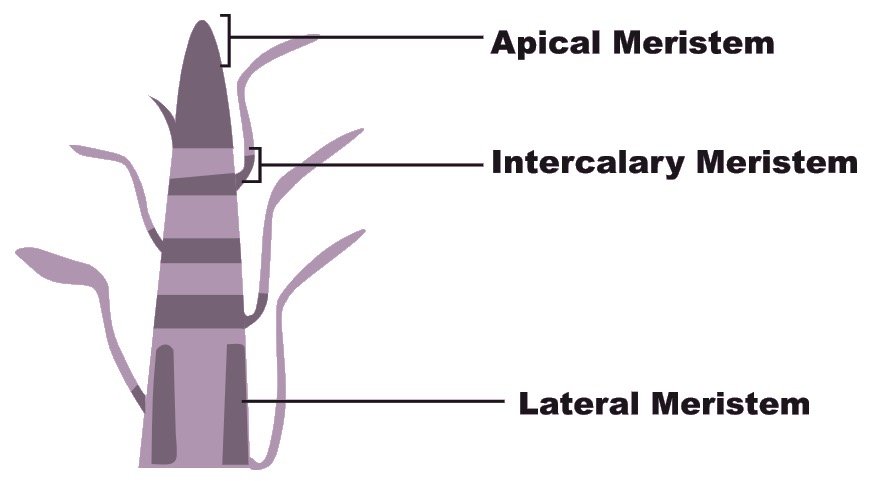 Apical, Intercalary, and Lateral are the three types. With the assistance of the “Apical Meristem,” we can explain that it happens at apices (both root and shoot apices). It takes place in the plant body’s internodes with the aid of the “Intercalary Meristem.” With the aid of the “Lateral Meristem,” it happens together with the girth of the plant body.

To help identify and differentiate intercalary meristem, see the figure below. Meristematic tissues are composed of cells that are actively dividing. Plants with uncertain growth are caused by them. Permanent plant tissues such as vascular tissues, epidermis, phellem, ground tissues, and so on are produced by them.

This layer comprises of meristematic cells that divide mitotically in the stem at the base of nodes and leaf blades. Intercalary growth is the term for the growth that occurs at this moment. This is important for these plant groupings because it acts as an adaptation against herbivory.

What is Intercalary Meristems?

2. Primary by origin (originating straight from an embryo)

1. Subapical Meristem This occurs when division activity is gradually restricted to any area of the internode/floral axis/spike axis where it is very lengthy and contributes considerably to internodal tissues.

2. Dedifferentiation of Mature Tissues Although the intercalary meristem develops into developed tissues, some of it is “silently retained” after maturation. This quiescent tissue dedifferentiates when it is triggered by an environmental, growth, or developmental situation.

The transition of cells from a highly differentiated state to a less differentiated or stem cell-like state is known as dedifferentiation of mature tissues. It contributes to division activity for a long period through this pathway, and it is generally the primary contributor to longitudinal growth in the later stages of plant life.

Intercalary meristems have been found in thallophytes (algae), bryophytes (mosses), pteridophytes (ferns), gymnosperms (conifers, cycads), and angiosperms (monocots and dicots) across a variety of plant lineages. Although the position and functions of intercalary meristems vary greatly throughout the spectrum, their importance in plant growth and development stays constant.

Intercalary meristems have been found in the lamina of kelps (Phaeophyta/Brown algae) among thallophytes/algae. In kelps, an intercalary meristem exists between the stipe and the blade to lengthen the thallus.

1. In the vegetative shoot, apical cells divide, resulting in the development of “merophytes.”

2. These merophytes operate in unison, resulting in the formation of units known as “phytomers.”

3. A phytomer can be subdivided into two different levels.

4. The meristematic activity of Equisetum spp. is maintained by the basal internodal tier, which leads to the development of the intercalary meristem.

It satisfies several essential necessities of a plant to live and proliferate, ranging from vertical (longitudinal) growth to grazing tolerance to gynophore development. The following are some of the most significant functions of the intercalary meristem:

2) It aids in the regeneration of lawn grass that has been grazed by animals or mowed repeatedly.

3) It promotes bamboo height development by elongating the internodes.

4) It has a significant impact on grasses’ developmental morphology and physiology. When grasses grow, the entire leaf primordium has meristematic activity at initially, but later, only the intercalary meristem has cellular division.

5) In culmed grasses such as sorghum, millet, and sugarcane, the intercalary meristem is important for culm elongation.Culm is an essential component of the malt product produced from these grasses. The more elongated the culm, the greater the amount of malt that may be extracted. They are also utilised as healthy animal feeds due to their great nutritional content.

The following autotrophs and their locations, in summary, exemplify intercalary meristems:

1. Grasses and grains belong to the Poaceae family (at the base of internodes and above the nodes).

2. Present in a mint container (below the nodes)

3. Possible in Pinus (at the base of the leaves)

4. Exhibit in bamboo (in internodes)

5. It’s found in sugarcane (at the base of the several uppermost internodes)

6. Assembled in Equisetum (located above each node)

8. Present in kelps, Chorda filum (in both vegetative and sporophytic phases)