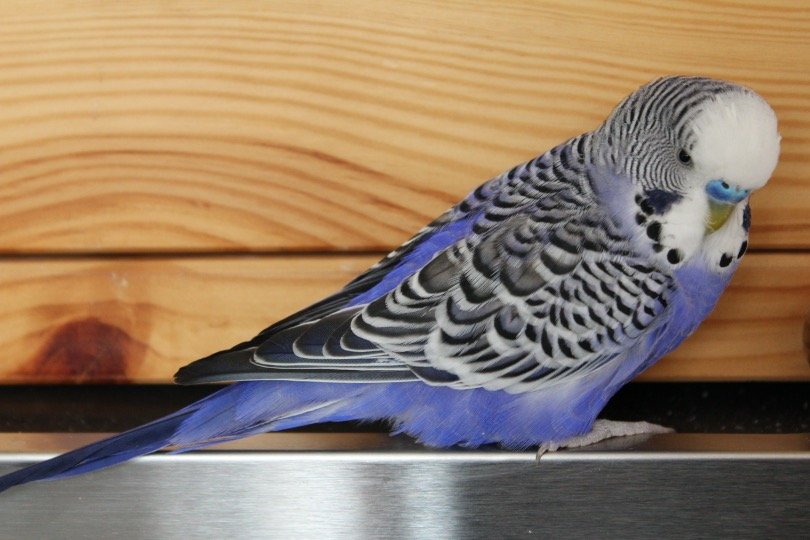 Budgerigars, sometimes known as “budgies,” are small, vividly colored Australian birds native to the country. Budgerigars are beautiful nomadic parrots that are native to Australia and are distinguished by green and yellow colors on their chests and backs.

Their backs are similarly decorated with black feather motifs. Females have pink or purple color around their beaks, whereas males have blue coloring around their beaks. Budgerigars spend the majority of their time in trees, where they construct elaborate nests that include knots and other depressions just large enough to accommodate their eggs.

Budgerigar birds are extremely gregarious amongst themselves, and they can be gregarious with humans as well. Males and females will pair up and live in loose colonies in both the northern and southern hemispheres, depending on the conditions.

These birds can survive for up to 15 or 20 years in the wild, depending on the species. Budgerigars are quite easy to domesticate and make excellent companions for children. Pets develop strong attachments to their owners and will be able to recognize them even if they have a different hairdo or outfit on.

Budgerigars are capable of learning a wide range of words and love conversing with people. Some budgies have demonstrated the ability to communicate in hundreds of words.

• Budgies are considered to be one of the most popular pets, ranking third behind dogs and cats.

• According to the native dialect of the Australian Aborigines, the term Budgerigar translates as “delicious to eat.”

• They have over 1,000 possible color combinations, including green, yellow, blue, and many hues in between. They have a lot of fun with it.

• Wild Budgerigars are easily domesticated birds that can be trained to mimic human speech.

Budgerigar birds are endemic to Australia, and they can be found migrating north and south across the country in their natural habitat. These birds are also quite gregarious, which makes them popular as pets all around the world.

Budgies can also be found in North America, South America, Europe, and Africa as a result of their popularity as a pet bird in all of these regions. In fact, there are an estimated five million of these tiny birds in the globe now, according to some estimates.

Size and Appearance of a Budgerigar

Budgies are smaller than many other parrot kinds, including the cockatiels. Most of the time, they only weigh between 1 and 1.5 ounces. They are usually only seven inches tall and have a total wing span of 12 inches. They are also known as “shorties.”

Despite the fact that Budgies can be found in a plethora of different color combinations, yellow and green are the most frequently encountered. Their heads and backs are frequently marked with hints of blue as well as black. The tail feathers can grow to be as long as 4.5 inches in length.

Unlike most birds, budgies are gregarious creatures, preferring to pair up in the wild and even living in small colonies of a few hundred individuals when not on migration. While in captivity, these birds are playful and have a natural talent for imitating human speech and other sounds. Generally speaking, they are kind and enjoy interacting with their owners.

Budgerigars prefer to dwell in tree holes or other crevices that are spacious and flat enough for them to lay their eggs when they are out in the wild. However, as pets, these birds will be content on a flat box or a floor that has been covered with a soft substance. Clean wood shavings or bits of shredded paper would function wonderfully as a nesting material for your bird of prey.

Budgerigars are mostly dependent on grass seeds for their sustenance. They also forage for fruits and vegetation by rooting around on the ground. In addition to fruits, berries are a popular snack, but too much fruit can make a budgie unwell.

There is an increase in the overall budgie population. Habitat destruction and other threats that would be of concern to other wild wildlife are not a major source of concern for these birds, which can be kept as pets for a low cost and are easily maintained.

Larger birds, such as hawks and falcons, prey on the budgie, however they are not the only ones. Feral cats, rats, and other rodents have been known to raid budgie nests in search of eggs or to hunt the birds in their own territory.

Approximately eight months after hatching, female budgies attain adulthood. If they are allowed to roam free, these birds will team up in order to mate and rear young. The average number of eggs laid by a female in a single clutch is four to six.

Chicks are born blind and devoid of down or other feathers when they are first hatched. For the first 10 days or so, until their eyes open, their mothers are responsible for keeping them warm on a continuous basis at all times.

Their down and feathers will begin to develop at this point, but it will be another four or five weeks before they are ready to leave the nest. Fledglings begin to learn to fly at the ages of six and eight weeks and make their first effort to escape the nest.

The age at which a chick is ready to fly varies based on the number of chicks in the brood and the age of each individual chick.

For example, chicks born without any other nestmates are more likely than birds from larger clutches to learn to fly at a younger age. The “only children” who gain from their parents’ increased attention are the youngsters themselves.

When it comes to the likelihood of the budgerigar becoming extinct, its conservation status is classified as “least concern.” It is easy for them to reproduce and they do so often in both the wild and captivity. Consequently, the entire worldwide budgie population is expected to be more than 5,000,000 birds, with the number expanding every year.