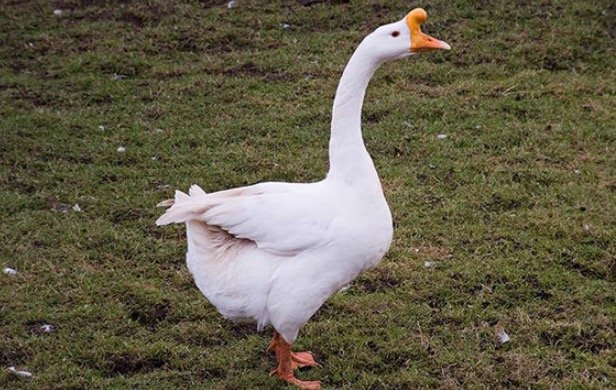 “The Chinese goose is referred to as the swan goose in some areas.” In the opinion of a lot of people, the Chinese goose is the most attractive member of the goose family. Because of its exquisite appearance and to elongated neck, it has earned the moniker “swan goose.” Known for its loud, recurrent vocalisations as well as its high egg production, it is a popular domestic goose.

• The Chinese goose is a productive layer laying between 60 and 100 eggs in a single breeding season.

• It has a resemblance to the Asiatic wild swan goose and can be found in the wild.

• In 1788, George Washington was presented with a gift which was a pair of Chinese geese.

• Many gardens benefit from the weeding abilities of Chinese geese.

• They are guard geese, and if they see anything that might be dangerous, they will honk loudly.

Anser cygnoides domesticus is the scientific name for this species.

They have black beaks, orange feet and brown eyes. Their necks are elongated and creamy, and their breast feathers are a pale grey colour. The necks of Chinese geese are arched, and their bodies meet at a 45-degree angle to one another. This is why they have such a distinctively elegant appearance.

Every goose has an important knob at the tip of its beak that distinguishes it from the others. This is known as the basal knob. In males, this basal knob is greater than in females. A common male posture is for him to stand up straight with his head lifted high or tilted slightly upward.

Female Chinese geese are more likely than males to maintain a level or modest downward tilt to their heads. There are two strains of Chinese goose.

Specifically, the strain of the Chinese goose that is largely found in the United Kingdom is a hefty goose which is employed for egg production in addition to being kept as a decorative bird. The most prevalent strain in the United States is a thin bird that is commonly kept as pet or as decorative bird by the general public.

They are well-known for their loud and varied vocalisations, which may be heard all across the world. These birds will appeal to you if you appreciate birds that make their presence known. They are unsuitable for urban farming because their honking will annoy your neighbours and prompt them to complain.

Chinese geese are bright and curious creatures, but they are naturally wary of humans and other animals. Those who have been raised without human touch will become hostile if they are approached by another person.

Chinese geese are found in flocks on farms. They can survive in practically any climate, and they can be found all throughout the world, even Antarctica. Chinese geese require water sources that are large enough to accommodate their full beak. A little body of water where they may splash around, groom themselves, and drink water is a favourite spot for them.

Chinese geese generally graze on grasses. A big, grassy area where they can freely graze alongside other animals may be their sole source of food if they have access to one. The grass should be no more than four inches tall at the most.

Giving other animals access to your grass will assist to keep your grass low. Free-ranging geese will not require as much supplementing in their diet in warm weather, as they would in the winter. Winter is a popular time for many people to boost the diet of their geese with dry wheat and feed pellets.

These are the most nutrient-dense foods available for geese. A large bowl or bucket of water should be provided with a dry supplement if one is being fed.

What You Shouldn’t Feed Chinese Geese

Unless specifically instructed to do so, Chinese geese and other water birds should never consume powdered foods or dry mash. The condition known as “dropped tongue,” which is a terrible fungal disease, might result due to this.

Give Them a Little Grit

Many birds require grit in order to maintain a healthy digestive system. However several geese obtain this from eating dirt in addition to small stones, it is preferable to provide a mixed grit made from oyster shells and coarse sand to ensure that they do not become ill.

Chinese geese enjoy foraging for weeds and tiny plants in the wild. Several people have used them as weeder geese in berry patches, grape crops, and other areas where they can hunt for weeds without damaging the crops, and they have shown to be effective.

Snakes are one of the most dangerous predators of geese. It is likely that snakes and rats will attempt to consume the eggs and infant goslings. Foxes and raccoons are examples of other predators. Here are some suggestions for safeguarding your geese, eggs, and young goslings against predators.

• Elevate the status of your coop. Raising a chicken or geese coop above ground level will help keep snakes away from your flock.

• Controlling rodents is important. Mice, rats, and squirrels frequently visit geese coops to eat the grains that have been spilled. They are just like a magnet for snakes, so do everything you can to keep them away. This is one of the reasons why some people maintain barn cats in their chicken coops.

• Fill in all of the gaps. Snakes only require a little opening to gain entry into a coop.

• Eggs should be collected on a regular basis. Don’t leave any tempting treats available for snakes or other predators to take advantage of.

• Keep it as clean as possible. Ensure that the grass around your coop is kept well mowed, and that any food spills are cleaned up right away.

Reproduction and the Cycle of Life

A large number of geese will sit on the eggs, which is known as “brooding.” The mother will demonstrate her intent by building a nest in a quiet location, if she intends to brood, While she is in this state, she should be kept alone and safeguarded from potential predators.

In addition to this, many ganders will keep an eye on their partners when they are brooding. Every day, she is required to leave the nest. Geese who sit on their eggs for an extended period of time without moving risk killing themselves or the eggs.

If she isn’t removing herself from the eggs, you may need to carefully take her off the eggs. Many immature, inexperienced geese are unable to successfully brood their young.

Maintaining a warm environment for the eggs and turning them over by hand on a daily basis can assist a goose that does not wish to brood. It’s possible that you’ll have to place them in an incubator to help them hatch.

Birth of the Goslings

The goslings will emerge from the eggs once they have hatched. After the eggs have finished cracking and kids have emerged, it can take up to two or three days for the process to be completed. Young goslings are distinguished by their yellow coats and orange beaks, which give them the appearance of baby ducklings. In the first week, the size of the goslings will double.

White, brown, and grey will appear in the down of their fluffy golden feathers. In week five, they have another growth spurt. As time goes on, their chirp will begin to sound more like a honk. By the time they are 12 weeks old, they are ready to accompany their mothers to the pasture.

Goslings can be identified as male or female when they are eight weeks old based on the shape of their basal knobs. Males’ basal knobs are greater than females’. The majority of Chinese geese families will remain in the pasture together. Being able to witness them roaming around the fields with each other is very nice. Chinese geese are life partners.

Chinese geese are a widely bred kind of goose. There are between 60,000 and 90,000 Chinese geese in the world.