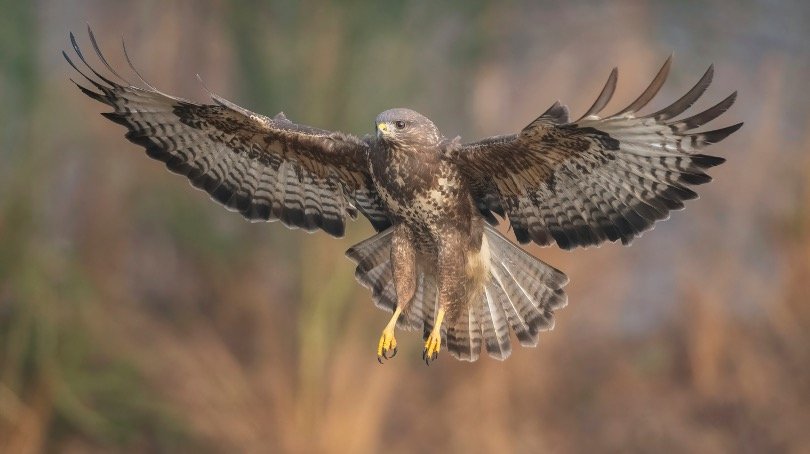 Buzzards are found in Europe, Africa, and Asia, among other places. Common buzzards are carnivores, which means they consume rodents, other birds, reptiles, and occasionally dead animals, among other things.

These birds occasionally congregate in groups or flocks despite the fact that they are typically solitary. They are committed to one another.

Interesting Facts about the Common Buzzard!

• A large number of them may be found across practically every county in the United Kingdom.

• In order to bring worms to the surface so that they can consume them, these birds pound their feet on the ground.

• Since many tourists mistakenly believe they have sighted an eagle when in fact they have spotted a common buzzard, these birds are frequently referred to as ‘tourist eagles’.

Distribution and Habitats of Common Buzzard

In Europe, this buzzard can be found in a wide variety of locations including the countries of Ireland, Scotland, Greece, France, and England, among many others. These species are also common throughout Asia, including India, Mongolia, Russia, and China among other places.

During the colder months, common buzzards that reside in northern climes migrate to South Africa. They can be found in a variety of habitats, including farmlands, marsh bogs, forests, scrub, and even areas surrounding densely populated cities and towns.

These birds prefer moderate climates to live in. Year-round, these buzzards can be spotted throughout Scotland, Wales, and England. They are very active throughout the spring months.

They are frequently seen perched on traffic lights, fence posts, and on trees overlooking open fields or pastures. They can often be observed soaring above fields and mountainsides in search of prey.

Nests of the Common Buzzard

With the help of sticks, branches, and twigs, these buzzards construct a large, dense nest. Heather or leaves are used to line the interior of the nest by these birds. Numerous nests are constructed in trees near the trunk or at a strong branch fork.

They range in height from ten to eighty feet. Other species of buzzard nest on rocky cliffs. Because these birds utilise the same nest year after year, the nest may change in size and shape over time as a result of maintenance efforts. The male buzzard is usually the one who constructs the nest.

Scientific Name for the Common Buzzard

The buzzard’s scientific name is Buteo buteo. It is a little bird with a long tail. The word buteo comes from the Latin language and means “hawk.” This bird is commonly referred to as the tourist eagle since it is frequently mistaken for an eagle by tourists in Europe.

It is a member of the Accipitridae family and the Aves class of animals. The common buzzard is divided into 28 subspecies. Some of them are as follows:

The bird’s feathers are a mottled brown, light brown, and white. They range in size from medium to giant, and have black eyes along with a hooked beak. In length, they range from 15 to 22 inches.

They weigh between 1 and 3 pounds. Males often weigh less than females, which is an intriguing fact. As a result, they are better fliers.

Depending on the species, the bird’s wingspan can range from 42 to 53 inches. The brown feathers of a buzzard can assist it in hiding from predators when it is in the woods. Furthermore, its speed may be advantageous in escaping from danger.

The diets of these two birds are quite different. Carrion is the primary source of nutrition for vultures. A common buzzard preys on reptiles, rodents, as well as other birds, and it will also consume carrion if it can get its hands on it.

The feet of common buzzards and vultures are varied in shape and size. The buzzards have powerful talons that are designed for grasping and transporting prey.

Hawks, on the other hand, are more likely to capture prey than they are to consume carrion. Buzzards eat a variety of foods, including carrion.

Migration Pattern and Timing of the Common Buzzard

This particular bird is classified as partly migratory. Individual buzzards have varied migratory tendencies in different parts of the world, which means they migrate in different ways in different places. Some travel further south than others, depending on the weather conditions in their home country or region.

Some buzzards move only a short distance until they reach a place that is warmer and has more prey for them to ingest during the winter months. When it comes to winter migration, the steppe buzzard is one of the species that travels a particularly great distance.

Steppe buzzards begin their migration from Asia Minor to the Cape of Good Hope in South Africa beginning in September and October. They begin migrating again in March, this time to return to their nesting habitats.

Diet of the Common Buzzard

These buzzards are carnivores, which means they eat meat. Most of their time is spent hunting for prey on their own during the day.

What Do Common Buzzard Eat?

In addition to rodents such as voles and mice, buzzards eat snakes, reptiles like lizards, insects, and dead animals for instance carrion. Raptors make the most of whatever food sources are available to them! Occasionally, common buzzards will consume toxic bait that has been placed out to kill foxes.

While the common buzzard is a bird of prey, it is also preyed upon by a variety of predators. Predators of this bird include foxes, wildcats, and eagles, among others. Foxes as well as wildcats may trap a bird by creeping up on it when it is feeding on carrion or dead animals.

Eagles can easily outmuscle common buzzard because they are significantly larger than these birds. It is possible that humans will pose a threat to these birds. People would sometimes set poisoned traps in order to get rid of a fox that has taken up residence in the area.

This toxin may be consumed by the buzzards. Another threat is the loss of habitat as a result of deforestation. The common buzzard’s official conservation status is Least Concern, with a stable population, despite all of these concerns.

March to May is the breeding season for this species. Flying in circles and diving are two ways in which a male can attract a female. These birds are monogamous in their relationships. The female lays 2-4 eggs, which hatch in 33-38 days after being laid.

Chicks are the name given to newborn buzzards. During the breeding season, the male hunts for food for both the female and the chicks. When the chicks are 50 to 60 days old, they begin to develop a full coating of feathers.

When the chicks have spent 14-16 weeks in the nest, they are robust enough to survive on their own. Buzzards achieve sexual maturity when they are three years old. The fact that this bird can live for up to 25 years is one of the most astonishing things to learn about it.

According to the International Union for Conservation of Nature’s Red List of Threatened Species, there are between 2,100,000 and 3,700,000 mature common buzzards in the world.

Europe has the greatest population. There are between 1,630,000 and 2,170,000 adults in Europe. This bird’s conservation status is Least Concern, indicating that it has a stable population.